Bangladesh and New Zealand meet in a do-or-die match in ICC Champions Trophy 2017.

The battle of survival has begun in Group A of ICC Champions Trophy 2017. All four sides have played two games each, and only England have managed to qualify for the semi-finals stage winning both matches and without any rain interruptions coming their way. The other three New Zealand, Bangladesh and Australia are still in contention for the semi-final spot, making the remaining contests a virtual knockout. The first of these will be between Bangladesh and New Zealand at Cardiff, on Friday. Live cricket score: BAN vs NZ

Both these sides have fallen prey to rain. New Zealand, especially, were in a winning position against Australia in their opening tie when the weather halted their progression. Bangladesh, in a do-or-die match against the same opponent, were rescued by rain gods. Both teams will be well acquainted having played against each other less than a month ago. Bangladesh, mind you, have played most number of ODIs against New Zealand since ICC Cricket World Cup 2015, with a win-loss ratio of 1:4.

In fact, Bangladesh have won second-most number of matches (home and neutral ODIs) against New Zealand: 9 out of 20.

Head-to-head tally is in favour of New Zealand. They have won 6 of 7 games at neutral venues against Bangladesh. Both teams have clashed just once in England, back in ICC World Cup 1999. New Zealand handsomely won the match by 6 wickets.

Bangladesh s Champions Trophy campaign has all been about one man: Tamim Iqbal. The opener has scored 223 of 487 runs that the team has accumulated. It has been a collective failure for their middle order that puts them in a languishing position.

“We have very skilful batsmen who haven’t fired yet,” Tamim said. “They are all proven players. They will do it in the future. It is a matter of one innings. If a couple of guys start scoring in the next game, we are a very dangerous side.”

The likes of Shakib Al Hasan, Sabbir Rahman, Imrul Kayes and Soumya Sarkar have disappointed, especially when it comes to gauging the match situations. With one match remaining, all these batsmen need to bring out their A game with pride at stake.

Bangladesh played an extra batsman in their opening game against England, but reverted playing an extra bowler. Seeing how rain has continuously affected the games, Bangladesh would again want to play with an extra batsman, leaving out Rubel Hossain.

Much like Bangladesh, New Zealand have been dependent on their skipper Williamson. He gave his all to keep his side in the hunt. His consistency has been on the money in this Champions Trophy, accumulating 187 runs. Apart from Williamson, the batting unit, which has the likes of Neil Broom, Corey Anderson and Jimmy Neesham, looks troubled.

Having already played at Cardiff, New Zealand will find comfort in analysing the conditions. “England bowled very, very well,” said Williamson. “The way they extracted (some bounce) by cross seamers hitting the wicket hard, he explained.

It will be a good call for the Kiwis to bring in Colin de Grandhomme in place of Anderson, adding much variety in the bowling as well. With spinners ruling the roost in the last few games, it would be an unreasonable call not to include Jeetan Patel in place of Neesham. 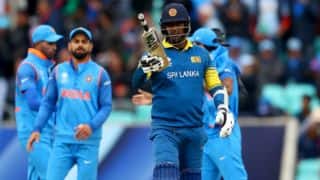