The shoulder injury for Ben Stokes let him being forced to sit out of the tie against former 2-time champions Kolkata Knight Riders (KKR) in IPL 2017.

England fast bowler Ben Stokes, who has been sidelined for Rising Pune Supergiant (RPS) in the ongoing Indian Premier League (IPL) 2017, has give England a headache ahead of the upcoming ICC Champions Trophy 2017. Stokes injury came following a three-wicket win over Mumbai Indians (MI) this week, which turned out to be a grade-one muscle tear. It led to him being forced to sit out of the tie against former Kolkata Knight Riders (KKR), which Pune lost, while he will also not be playing against Virat Kohli’s Royal Challengers Bangalore (RCB) on Saturday. England play their opening tie of the ICC Champions Trophy on June 1 against Bangladesh. FULL CRICKET SCORECARD: Rising Pune Supergiant (RPS) vs Royal Challengers Bangalore (RCB), IPL 2017, Match 34 at Pune

Meanwhile, Australian legend Ricky Ponting has warned that Stokes could be targeted with the ball instead of the bat to lower his all-round domination in the game. “The first thing I’d do [as an opposition coach] is try and get on top of him with the ball. When he’s bowling, I’d have batters make sure they’re ultra-aggressive against him early on. Because if there are any of those doubts and those thoughts in the back of his mind about maybe not being able to execute under pressure, then you need to be able to get on top of that really early,” he said, as reported by cricket.com.au.

“To me he looks like the sort of player that if he gets off to a good start then he’ll probably have a really good game. But if he gets attacked early on or under pressure early on, that’s when the game becomes really difficult. But his ball striking is outstanding … I wouldn’t be too worried about him as far as his batting goes, but I’d certainly try and get on top of his bowling,” he added. IPL 2017: For Ben Stokes, MS Dhoni is a hero and Steven Smith a villain

Ponting is also not worried of Stokes records in the Twenty20 (T20) format. “I’m sure [Pune] weren’t looking too much at his record because it is quite a tough game when you’re batting down the order and he’s probably bowling all the difficult overs as well. He’s bowling the overs at the end like we saw in that World Cup final. So your actual numbers don’t look that good, but if that’s what your team needs to have someone like that to fit in, that’s what you do,” said Ponting.

“I’m not sure if the price tag puts any more pressure on him. There’s pressure on every IPL player. I’m sure he’s thinking about the money because he’s got a lot more than anyone else has in an IPL auction, but it’ll be about how he handles the pressure of the tournament. And we’ve seen at different times he probably hasn’t handled the pressure that well. He’s an exceptionally talented all-rounder and RPS will be expecting a lot of him, no doubt,” he concluded. 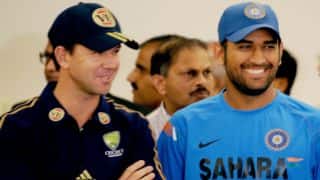 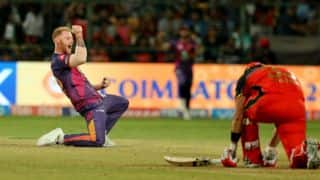