New Zealand's ICC Champions Trophy hopes have been boosted by the return from injury of Mitchell McClenaghan, Corey Anderson and Adam Milne.

The BLACKCAPS ICC Champions Trophy hopes have been boosted by the return from injury of Mitchell McClenaghan, Corey Anderson and Adam Milne. The trio were on Monday named by selectors Mike Hesson and Gavin Larsen in the 15-man squad for England following months of rehabilitation, and after demonstrating their fitness with their respective Indian Premier League sides. McClenaghan has featured for the Mumbai Indians; Milne with the Royal Challengers Bangalore, and all-rounder Anderson has returned to the bowling crease with the Delhi Daredevils. FULL CRICKET SCORECARD: Australia vs New Zealand, ICC Chmapions Trophy 2017, Match 2 at Edgbaston

The BLACKCAPS squad for the ICC Champions Trophy features five specialist batsmen, four pace bowlers, three seam-bowling all-rounders, two-spinners and a wicket-keeper. Batsman Tom Latham will continue to provide an option behind the stumps. Hesson said the three players returning from injury had done everything possible in a bid to be fit for selection.

“It’s been good to see all three back on the park and bowling; together they add a lot of experience to our squad. Mitch and Adam have been running in well, and Corey has shown he’ll be capable of providing an option with the ball.” The squad was not a straight-forward one to pick, Hesson said – with strong competition for places across the board and a lot of discussion over the final balance.

“We believe it’s an exciting squad; an experienced squad, and one that has the batting power and the bowling variations to prevail in a potentially high-scoring tournament. Having four all-rounders [including Mitchell Santner] certainly helps with balance, and the return of Mitch and Adam will offer options with the new ball, through the middle of the innings, and in the death overs.”

The BLACKCAPS will play an ODI tri-series in Ireland ahead of the ICC Champions Trophy and Hesson confirmed a small group of players from that squad were likely to remain in England as cover during the tournament. 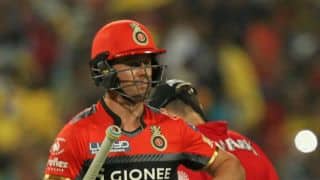