England, despite competing in 19 major ICC ODI events since the inaugural World Cup back in 1975 have yet to lift a trophy.

Joe Root accepted England had missed a “golden chance” to end their long wait for a maiden one-day international title after a crushing eight-wicket Champions Trophy semi-final defeat by Pakistan. But the star batsman, England’s Test skipper, is determined to put the hurt the white-ball side feel now to good use when the country stages the 2019 World Cup. England, despite competing in 19 major ICC ODI events since the inaugural World Cup back in 1975 have yet to lift a trophy. Their only comparable limited overs success came when they won the 2010 ICC World T20 in the Caribbean. England have undergone something of an ODI revival since a dismal first-round exit at the 2015 World Cup. Full cricket scorecard: England vs Pakistan, ICC Champions Trophy 2017, Semi-Final 1 at Cardiff

But none of that dash or even much in the way of cricket know-how was on show as they failed to adjust to the demands of playing on a used pitch against Pakistan in Cardiff on Wednesday. Having been 128 for two, they lost their last eight wickets for 83 runs as they slumped to a lowly 211 all out. Well though Pakistan bowled, the knowledge they had struggled to get to 237 in seeing off Sri Lanka in the Welsh capital just two days earlier was a stark reminder to England of what might have been had they managed to set a total of around 250-270. Instead, Pakistan were able to cruise to their victory target, having adapted to the slow and low surface with some skilled seam bowling and dynamic batting.

“I’m just very disappointed,” said Root, who top-scored for England with 46. “We’ve played some really good cricket throughout the whole of this summer, and it was frustrating not being able to do it (in the semi-final). This doesn’t feel great at the minute but there’s a lot of cricket still to play this summer, and we’ve got to make sure we’re right for that. This was a golden chance to win a tournament at home, and I think all we can do now is keep looking towards that World Cup and use this as a really good platform.” The Yorkshireman added: “We know we’re not the finished article.

“We have made huge strides and we’ve got to continue to work out ways to get on the right side of these scenarios when things aren’t favourable to us. But more than anything we’ve got to keep that drive we’ve had over the last 18 months to keep getting better – so when that World Cup does come around we’re in the best shape possible to give ourselves the best chance of contending in that final.” Wednesday’s reverse was just England’s second defeat in their last 13 ODIs and coach Trevor Bayliss was confident it would not do lasting damage to Eoin Morgan’s talented side.

“We’ve played worse than this over the last couple of years and been knocked over fairly easily in some games, (but) it doesn’t seem to affect them,” he said. “They’ll put this to the back of their minds and go and perform the next time,” the Australian added. Playing on used pitches is something that can happen at major events and Bayliss accepted England had to find a way to remain competitive in less than ideal batting conditions.”It was very difficult to let the ball come on and hit through the line … (but) you have to learn to play on different wickets — sometimes at home, sometimes away.” 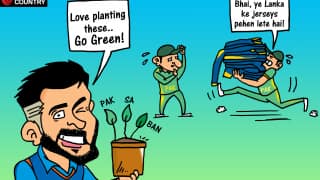 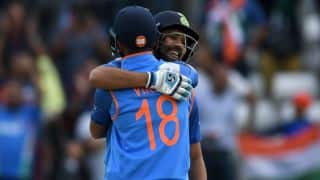 Virat Kohli on Rohit Sharma being rested for West Indies tour: His batting contribution will be a huge factor for India in upcoming tours