ICC Champions Trophy 2017: India are under pressure vs Pakistan as they firm favourites, feels Sarfraz Ahmed

ICC Champions Trophy 2017: India are under pressure vs Pakistan as they firm favourites, feels Sarfraz Ahm

"You will see Pakistan doing new things and playing out of the box cricket against India in ICC Champions Trophy 2017," said Sarfraz Ahmed.

Birmingham: Pakistan skipper Sarfraz Ahmed has claimed that India, who are being termed as the clear favourites for the high octane Champions Trophy clash to be played at Edgbaston on Sunday, will be under pressure and not Pakistan. India won the last Champions Trophy in 2013 and head into the marquee event as favourites after a hugely successful home season with 10 Test wins. The Men in Blue are number one in the Test rankings after series victories over New Zealand, England, Bangladesh and Australia, and would hope to carry that form into the Champions Trophy. “It is true that on papers India are better than us but in today’s times game has changed. Whosoever plays better on the particular day, will win the match. On the other hand, it is India who are under pressure as they are going into the game as favourites,” said Sarfraz on the eve of the much anticipated encounter. FULL CRICKET SCORECARD: India vs Pakistan, ICC Champions Trophy 2017 Match 4 at Edgbaston

While Pakistan hold a 2-1 lead over their fierce rivals and neighbours in the Champions Trophy, it is India who have won 10 out of the 11 contests at the World Cup and World T20 tournaments between the two sides. In recent times, however, the rivalry between the two cricketing giants has been one sided with India enjoying the lion’s share of positive results.

Meanwhile, coach Mickey Arthur admitted that it would be a big pressure game for sure but his team is prepared and the environment in the dressing room is unbelievably calm. “We are ready for the big game. Our change room is completely calm. It’s amazing. It’s the outside noise that there is. Within the dressing room, it’s unbelievably calm. We are unbelievably focused and are very very excited for the challenge that is going to be presented before us tomorrow,” Arthur said.

“We know for us to progress in this tournament, we have got to hit the ground running. So, whether it was against South Africa or Sri Lanka, the intensity and the expectations certainly from myself as a coach and I am sure from the captain, would have been exactly the same. We cannot take our foot from the pedal from any game. We cannot think its India and we have to lift ourselves because that would be very unprofessional,” he added. ICC CT17: PAK should not take any kind of pressure against IND, feels Butt

The South African further called on his players to control the nervousness and focus on their strengths rather than getting carried away by the hype and the emotions surrounding the clash. “They [players] can only control it [nervousness] themselves. And the only way your control that nervous tension is through your preparations,” he said.

“It’s like the exam. If you cram for an exam and you go and write it, you are always on edge. You are always nervous. You show a lot of tension because you know you haven’t done the work. But if you have prepared properly, you will be nervous but it will be excited nervousness. That’s where we find ourselves as a team at the moment. Extremely well prepared and ready to go,” he added. 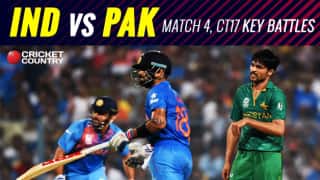 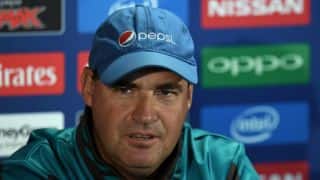