Mustafizur has picked up just one wicket from three games, is worried about the fact that his famous off- cutters are not working in England like they do in sub-continental conditions.

Bangladesh pacer Mustafizur Rahman, who tormented India’s famed batting line-up two years ago, is eyeing an encore of the same in the ICC Champions Trophy semi- final clash provided his off-cutters start working in English conditions. Two years ago during India’s tour of Bangladesh, Mustafizur rose to the limelight by bagging five-wicket hauls in two consecutive matches against India. It was his maiden series, and the wiry left-armer ended up picking 13 wickets in three ODIs to help Bangladesh beat India 2-1. India and Bangladesh will now square off in the Champions Trophy semi-final at Edgbaston on Thursday, and Mustafizur will hope to make a difference this time around as well too. FULL CRICKET SCORECARD: IND vs BAN, Champions Trophy 2017

However, the pacer, who has picked up just one wicket from three games, is worried about the fact that his famous off- cutters are not working in England like they do in sub-continental conditions. “There is no end to improving. My cutters are more effective back home. It is not working that well here, but I am still trying,” Mustafizur was quoted as saying in a PTI report.

“We have reached the semi-finals…With a semi-final against India in the offing, everyone is in high spirits. I hope that something good will happen,” he added before saying, “I always try to execute what I am thinking about and I try to give my best.”

Mustafizur is optimistic about a good result against India but said Bangladesh need to produce a collective effort for that to happen. “We always believe in ourselves. If everyone has a good day, then I hope something good will happen,” he concluded. 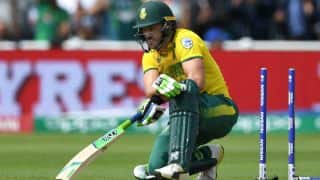