London: South Africa skipper AB de Villiers on Sunday blamed soft dismissals for their eight wickets loss to India in the Champions Trophy cricket tournament. De Villiers also conceded that his side was outplayed in every department of the game and two run-outs in back-to-back overs were the game-changers. The two quick run-out dismissals of AB de Villiers (16) and David Miller (1) in the 29th and 30th overs, respectively saw South Africa reduced to 142/4. De Villiers was run out when he ran for a single for du Plessis but a throw from Hardik Pandya at the wicket-keeper caught him short of the crease. FULL CRICKET SCORECARD: India vs South Africa, ICC Champions Trophy 2017 Match 11 at The Oval

The second dismissal was a clear case pf pressure resulting in confusion as both Miller and du Plessis ended at the wicket-keeper’s end after the former hurried for a run when the latter hit one straight into the hands of Bumrah at short third-man. Later, Bumrah accounted for Chris Morris (4) and Andile Phehlukwayo (4), while Bhuvneshwar removed Kagiso Rabada (5) and Morne Morkel (0) to floor the South Africans. “It’s not an ideal way to finish the tournament. Very disappointing. That’s not the way we usually bat. We got something going until those run-outs that cost us dearly today,” the Proteas skipper said after the match. FULL CRICKET UPDATES: India vs South Africa, ICC Champions Trophy 2017 Match 11 at The Oval

“We never got going. We were hoping to play a better game of cricket today. We did not plan to play conservative cricket up front. We were completely outplayed today. We had a lot of soft dismissals,” he added. De Villiers also praised the opponents and said the Virat Kohli-led Indian team, which defeated them by eight wickets to enter the semi-finals, had a great intensity which helped them a lot. “They had great intensity, they didn’t miss the mark very often and bowled pretty well,” he added. 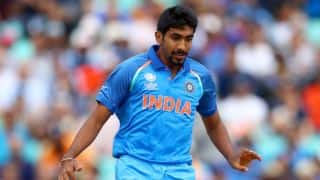 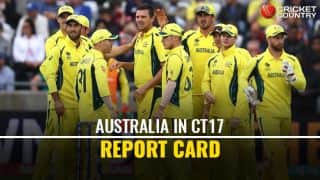