Pakistan coach Mickey Arthur believes his team has got no other option but to attack the Indian batters in order to give themselves the best possible chance to win.

London: Pakistan coach Mickey Arthur believes his team has got no other option but to attack the Indian batters in order to give themselves the best possible chance to win the much-anticipated, high octane Champions Trophy final at The Oval on Sunday. According to Arthur, India’s top-order has done marvelously well and the middle-order has not been tested throughout the competition, so if Pakistan want to create a chance for themselves, they’ll have to focus their attack on Rohit Sharma, Shikhar Dhawan and Virat Kohli who have been scoring the bulk of the runs for the Men in Blue. FULL CRICKET SCORECARD: India vs Pakistan, ICC Champions Trophy 2017 Final at The Oval

“We have to [attack], we’ve got no option. We’ve got to try and make that new ball really work for us. We’ve got to try and get into them,” Arthur told cricket.com.au. “That middle order haven’t had massive hits, they haven’t batted much under pressure of late. So we’ve got to try and put them under extreme pressure particularly by knocking their top order over,” he added. The Pakistan coach believes that if they can do that, they have got a real chance of getting to India’s underbelly. If Dhawan reaches 50 in the final, he’ll have got there more often than any other batsman ever in the Champions Trophy.

Of the men to have recorded 10+ ODI innings since January 2016, Kohli (98) and Rohit Sharma (72) have the highest batting averages. While India’s majority of the runs in the tournament have been scored by the top three, Pakistan have relied on their bowling attack to bring oppositions to their knees. Sixteen of the 28 wickets which the Sarfraz Ahmed-led side have taken in their past three wins have come in the second Power Play between the 10th and 40th overs of an innings. IND vs PAK, CT17, Final: Golden chance to avenge earlier defeat, says Imran

“Tactically we’d always spoken about our guys wanting to express themselves with the ball and wanting to attack,” Arthur said. After suffering a 124-run defeat in their opening game against the title holders, everyone had written off Pakistan but captain Sarfraz Ahmed, in the pre and post-match press conferences, kept on insisting that they will not give up on playing positive and attacking cricket.

That seemed to have worked on for them as they overcame both South Africa and Sri Lanka to enter the semis and then came out with a spectacular performance against hosts England to knock them out of the tournament and enter the summit clash. The Men in Blue have won all three of their previous matches against Pakistan in the knockout stages of International Cricket Council (ICC) tournaments to date and it is but obvious that they would start going into the finals as favourites. ICC CT 2017 Final, India vs Pakistan: Hasan Ali hopeful of fulfilling his dream as best bowler

However, it would not be an easy one for Kohli & Co to defend their title as they would face a charged-up and equally confident Pakistan, who surprised everyone by beating favourites England in the first semi-final at Cardiff on Wednesday. “Our execution has been great and we’ve attacked,” Arthur said. “The captain has kept slips and put catchers in attacking positions and it’s worked for us. He’s very positive. He’s an aggressive captain and he wants to take wickets. That’s how we want to play and I think that’s how you have to play one-day cricket now,” he added. 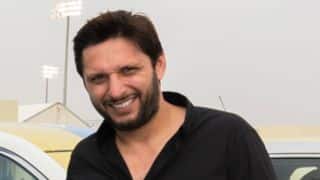 Shahid Afridi: Would want ICC to keep close eye on significance of India vs Pakistan ties