Sri Lanka leaves for the Champions Trophy in England Thursday after intense training and with the team hoping for an upset, coach Graham Ford said.

Sri Lanka leaves for the Champions Trophy in England Thursday after intense training and with the team hoping for an upset, coach Graham Ford said Wednesday. Speaking to reporters in Colombo ahead their departure, the South African head coach of middle-ranked Sri Lanka said preparing for the tournament was one of his biggest challenges. “We have to be realistic and accept that we go into this tournament as underdogs,” Ford said. “Sometimes that is a good place to be.” He did declined to identify the main opponents. However, he said Sri Lanka was up against some “fantastic players”, but they were in danger of lowering their guard. “We will just be going one game at a time. It is no point in looking past the next game. In world cricket today, every single match that you play is tough.

“There is some high quality performers in every team. The group we are up against has some fantastic cricketers. We have to be on our best,” he added. He said the Sri Lankans, currently ranked sixth in ODI games, had made progress in recent months thanks to intense training and could return from the tournament “with smiling faces”. Earlier this month, Sri Lanka hired famed South African paceman Allan Donald as a fast bowling consultant ahead of the Champions Trophy starting on June 1.

Sri Lankan skipper Angelo Mathews said the team had been improving and his colleagues were aware that there was no room for “hiccups.” “We will definitely improve day by day and I am sure the boys are up to the challenge,” Mathews said. “We don’t have time for hiccups in a tournament like this.”

The 15-man squad led by Mathews completed a week-long training session on Sunday. They went through strength and altitude training in the central hill region of Kandy, 500 metres (1,640 feet) above sea level, to prepare for conditions in England. 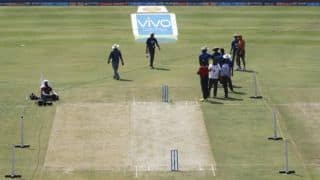