Finn was left out of England's original squad for a tournament featuring the world's top eight one-day international (ODI) teams.

England fast bowler Steven Finn hopes to make the most of his late call-up to Champions Trophy duty when the tournament hosts face New Zealand in Cardiff on Tuesday. Finn was left out of England’s original squad for a tournament featuring the world’s top eight one-day international (ODI) teams. But the 28-year-old Middlesex quick was recalled Sunday after pace bowling all-rounder Chris Woakes broke down with a side strain after during England’s opening eight-wicket win over Bangladesh at the Oval on Thursday.”It’s always frustrating when you are left out of squads, but you have to roll with the punches,” Finn told reporters in Cardiff on Sunday. Full Cricket Scorecard: ICC Champions Trophy 2017, England vs New Zealand, Match 6 at Cardiff

“If you get too down-hearted it can affect you more. I just focused on keeping my head up and fighting my way back into the team.”He added: “It’s obviously very sad for Chris Woakes, who is a good friend of mine, but I am glad that I’ve got the call.”Finn could well go straight into England’s XI in Cardiff if, as happened against Bangladesh, they opt to play just the one spinner. He sealed his return to international duty on the back of taking two wickets in front of the selectors for the second-string England Lions in a 144-run win over South Africa A at Northampton on Saturday.”I knew James Whitaker and Mick Newell were there watching me,” said Finn. “You feel that pressure, I suppose, knowing they’re watching you to call you up for this game. But that is no different from every time I pull on an England or Lions shirt.”

New Zealand endured a frustrating washout in their Group A opener against Australia when seemingly well-placed for victory.”The nature of this tournament is that every game is basically knockout,” said New Zealand captain Kane Williamson whose superb hundred was ultimately trumped by the rain.”We played some good cricket and we can’t control the weather, although it is a little bit frustrating.”England’s Joe Root, another of the world’s leading batsmen, made a century too in his first innings of the tournament against Bangladesh.

But while the sometimes excitable Root can be goaded into error, Williamson rarely looks anything other than serene at the crease.”He’s arguably the calmest man alive,” said New Zealand seamer Trent Boult of Williamson.”He gets more flustered on what to wear on a dinner date with his missus than he does on the field.”The last time these two sides met in a 50-over International Cricket Council event, New Zealand inflicted a humiliating eight-wicket defeat upon England in Wellington during the 2015 World Cup.

Not content with dismissing England for 123, the Blackcaps raced to their target in a mere 12.2 overs, with then skipper Brendon McCullum hitting 77 off just 25 balls, including seven sixes. One consolation for England is that McCullum has since retired from international cricket. Tuesday’s match takes place against the backdrop of a terror attack in London on Saturday that killed seven people and injured dozens more. England pacemen Mark Wood and Liam Plunkett had to head down to Cardiff by bus after their cars were parked in a police exclusion zone near their London hotel.

Finn insisted England were determined to play on following terror attacks that have struck both Manchester and London in the past two weeks, amid security re-assurance from the International Cricket Council (ICC).”We have been briefed on how we are going to be protected, so we’re very comfortable that there is a ring of steel around us and everyone who is in the ground will be safe,” said Finn.”We are obviously sad about it, and send our condolences to those affected by it. It is a sorry state of affairs.”But we will keep playing cricket and be defiant in the face of it and hope to put a smile on people’s faces here on Tuesday.” 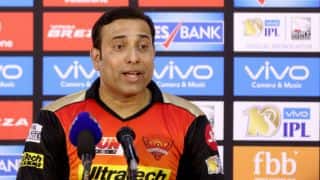