Australia are due to play Bangladesh - a country where they postponed a Test series tour in 2015 over security fears.

London: Australia’s cricketers have been told to be extra attentive by captain Steven Smith in the wake of the attack in London that left seven dead and dozens injured late on Saturday. Australia are due to play Bangladesh – a country where they postponed a Test series tour in 2015 over security fears – in the Champions Trophy One Day International (ODI) tournament on Monday at The Oval, whose ground is not far from where the attack by three assailants took place late Saturday. Three men rammed a van through crowds of pedestrians on London Bridge, before attacking revellers with knives – the perpetrators were subsequently shot dead at the scene by armed police. Full Cricket Scorecard: ICC Champions Trophy 2017, Australia vs Bangladesh, Match 5 at The Oval

Cricket’s global governing body the International Cricket Council (ICC) has released a statement confirming enhanced security measures would continue to be reviewed “in line with the threat levels”.”You never want to see that happening around the world – particularly when we’re so close to the events that happened last night,” Smith told an eve of match press conference.”We’ve been briefed by our security team this morning, and they are comfortable with where security is at. For us, it’s about just being diligent with everything that we do and continuing the tournament as usual.”

Smith, whose side need a win against Bangladesh after their opener with New Zealand was a no result due to inclement weather, said the team had been told not to leave their hotel on Saturday. That measure was put in place for the other teams in the competition as well.”Guys were a little bit concerned at the time, and didn’t really know what to do,” said Smith.

“So Frank, our security guy, just made sure we remained in the hotel and stayed nice and safe. I think everyone was on the phone letting their loved ones back home know that everyone was okay with everyone involved (in) our team.” 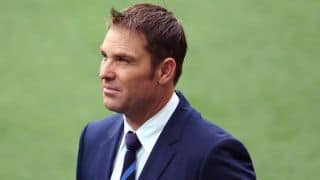