Brian Close led England to six wins and a draw.

The International Cricket Council (ICC) condoled the the passing away of former England captain Brian Close. Former Yorkshire cricketer and the youngest batsman to have played a Test for England, passed away on Monday at the age of 84. Close made his Test debut in 1949 against New Zealand at Old Trafford and ODI debut against Australia in 1972. The left-hander appeared in 22 Tests and remained unbeaten in his seven games as skipper. He also led his county towards winning the four championship titles. Close played his final first-class match at the age of 55 in 1986. READ: Brian Close, former England captain and Yorkshire legend, passes away at 84

ICC Chief Executive David Richardson said: “His playing career has become synonymous with bravery and his tenacity against the feared West Indies pace attack of the 1970’s, especially, still resonates with many cricket followers across the world. On behalf of the cricket community, the ICC would like to express its sincere condolences to his widow Vivienne, their son Lance and daughter Lyn and extended family and friends at this difficult time.” READ: Brian Close, Yorkshire legend passes away: Twitter reacts

Close rose as a powerhouse when he led England to six wins and one draw. Close also led Yorkshire to the Championship titles and Gillette Cup twice. He also played for Somerset at the end of his career. In his 37 years of First-Class career between 1949 to 1986 he scored almost 35,000 runs, which included 52 centuries and picked up 1,171 wickets. READ: Brian Close: The Combative Brave-heart of Cricket 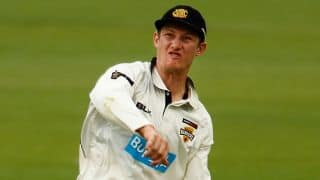