Mike Hesson insisted that the Black Caps will pay Afghanistan the utmost respect.

Hesson briefly coached Kenya in 2011 and 2012 with the African side coming up against the Afghans in second-tier events. The 40-year-old will renew his rivalry with them in the World Cup in Napier on Sunday. ICC Cricket World Cup 2015: POINTS TABLE

“They have three guys who bowl over 140km/h and they can swing it,” he said of quicks Shapoor Zadran, Dawlat Zadran and Hamid Hassan. “Generally, their batsmen don’t die wondering. It should be a good contest. We have to show them due respect and make sure we put in a good performance.”

New Zealand have won all four games in Pool A and have already secured their spot in the quarter-finals while Afghanistan can still gate-crash the last-eight, standing just a point behind Australia after losing to Bangladesh and Sri Lanka before edging Scotland by one wicket. Their next challenge is taking on four-time champions Australia in Perth on Wednesday. ICC Cricket World Cup 2015: SCHEDULE & MATCH DETAILS

“We’ll do our scouting on Afghanistan and we’ll prepare the best we can. We’ve still got a lot to achieve in the next few weeks,” said Hesson, whose team secured their quarter-final spot on Saturday with a nail-biting one-wicket win over Australia in Auckland. ICC Cricket World Cup 2015: Complete Coverage 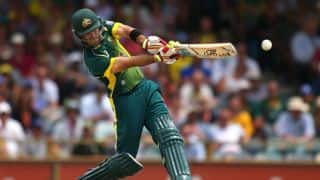