However, Rod Marsh said it was far from the end of Shane Watson's ODI career.

The 33-year-old, who averages 50.89 with the bat in career World Cup matches, was axed from the side to face Afghanistan at the WACA and replaced by fellow all-rounder James Faulkner, returning from a side strain. LIVE SCORECARD: Australia vs Afghanistan, ICC Cricket World Cup 2015

“(It) is a big decision but it’s one we thought we had to make because in Shane’s last 10 one-day games he’s got 220 runs at an average of 22 and unfortunately he’s been getting starts but he hasn’t been going on with it,” said Marsh. ICC Cricket World Cup 2015: POINTS TABLE

“We had to fit James in and someone had to go. I’m not saying it was a choice between any players but just happened to be it was Shane’s time to go for this particular match.” ICC Cricket World Cup 2015: SCHEDULE & MATCH DETAILS

However, Marsh said it was far from the end of Watson’s ODI career. “It doesn’t mean anything going forward except that he’s not in the XI at the moment,” he said. “If things change then there’s no reason he won’t be back in the XI. He’s a fine, fine player, he’s averaging 40 in one-day cricket and it was a tough decision. He’s in the 15 still, that’s the thing, and hopefully he’ll find himself back in the team at some stage. If hard decisions have to be made we have to make them.” ICC Cricket World Cup 2015: Complete Coverage 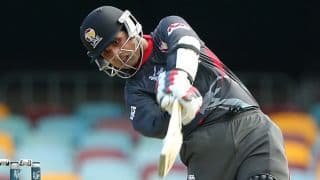