Brendon McCullum believes Indians fans will be in attendance in large numbers at the MCG for the ICC Cricket World Cup 2015 final.

Melbourne: New Zealand skipper Brendon McCullum believes Indians fans, who will be in attendance in large numbers at the iconic Melbourne Cricket Ground (MCG) for the cricket World Cup final on Sunday, will be rooting for his team and not Australia, adding that this support is needed in a game of such magnitude.

Asked at the pre-match press conference on Saturday about Indian fans traveling for the ICC Cricket World Cup 2015 final, McCullum said, “I’m pleased you touched on that because I reckon we might have the home crowd tomorrow actually.  It’s probably no secret that most of the other teams around the world would probably fair New Zealand to win over Australia. Hopefully we’ll get a good smattering of support tomorrow and I’m sure the Indian guys will certainly be rooting for us.” Mitchell Starc and Trent Boult in race to deliver final blow in ICC Cricket World Cup 2015 final

Reportedly, many Indians had already purchased tickets for the final, hoping it would turn out be a India-New Zealand encounter. However, Australia beat India in the semi-final on Thursday at the Sydney Cricket Ground (SCG) to enter the final. The 33-year-old said that the size of MCG would not be a problem for them, contrary to what many former cricketers believe. Australia’s Matthew Hayden went on to say the Black Caps would not be able to cope with the massive ground.

“We’re not intimidated. We’re excited. I guess right through the week there’s been a healthy sort of chat about those things externally. But from our point of view, we’re just going about our work in the same way. We know if we play well we’ll be tough to beat, and, yeah, that’s pretty much our preparation,” said the explosive opener. New Zealand train hard ahead of ICC Cricket World Cup 2015 final

New Zealand have played all their matches so far at home on much smaller grounds, where scoring sixes and boundaries are much easier, in comparison to those in Australia, especially the MCG. “It’s a great stage to be able to test ourselves in the development that we’ve made. Boundaries are big but the bats are bigger too. You see the balls are flying,” said the right-handed batsman.

McCullum said going into the encounter, both sides will have 50-50 chances of winning and hopes to have the last laugh on Sunday. “It’s been an amazing trip. We dreamed right from the start to give ourselves a 50-50 chance in the final which is an amazing achievement. We’ve done some special things over the last little while.

“We’ve had some tremendous support back home and also from around the world as well. We’ve got one more big hurdle tomorrow. We’ll give it everything we’ve possibly got. Hopefully if we play well, we’ll be smiling at the end of the day and be able to look back on a fantastic campaign and something which would hopefully invigorate the game and New Zealand.” Australia (AUS) vs New Zealand (NZ), World Cup 2015 Final, Preview: Trans-Tasman rivalry unfolds 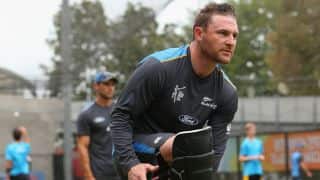 Brendon McCullum: Daniel Vettori is a tremendous ambassador for the game of New Zealand