“It was a difficult decision because obviously I want to go to both,” Key told reporters. He described Lee as “a close and long-time friend of New Zealand” and said that Mateparae, as New Zealand’s head of state, was more senior than the prime minister. Australia vs New Zealand: Graeme Smith expects a ‘Special Final’
Key said he had decided before New Zealand’s semi-final, when they beat South Africa with only one ball to spare, that if his nation made the final he would attend. “I think that’s the right call,” he said. New Zealand plays Australia in the final at the Melbourne Cricket Ground. Australia have the advantage over New Zealand: Stephen Fleming

“Our two countries have a special rivalry. Over the years we have been treated to some truly exceptional sporting clashes and I expect this one will be no different.” However, his Australian counterpart Tony Abbott is bypassing the cricket and will join other regional leaders in Singapore for Lee’s funeral. READ: Michael Hussey, Adam Gilchrist praise Michale Clarke

Lee “was a leading international statesman of his time, and laid the foundation upon which successive Singaporean and Australian governments have built a strong relationship,” Abbott said in a statement last week. Leaders from Japan, South Korea, India and Indonesia are also attending the funeral. READ: New Zealand to field unchanged side in World Cup Final 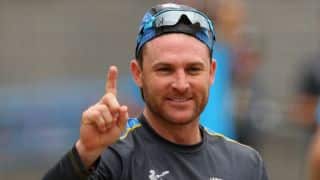