Although India have only four players from their 2011 World Cup winning squad, Kirsten will be well aware.

Melbourne: There is a lot of talk about Gary Kirsten as India and South Africa gear up to face each other at the ICC Cricket World Cup 2015 on Sunday. The two teams will meet at the Melbourne Cricket Ground (MCG). Kirsten, who was India’s coach during their victorious run at the ICC World Cup 2011, is now a part of the South African camp. Having known the Indians for long, he would have some good inputs in terms of strategy for the South Africans. South Africa go cautious on Vernon Philander’s fitness ahead of India clash

At the nets, Kirsten is guiding the batsmen through drills. He gives them throwdowns as they work on specific areas of their batting. Back when Kirsten was a part of the Indian think tank, he did the same, sending down deliveries tirelessly. Sachin Tendulkar had complemented him on putting in the effort. With the South African team, he continues to send those throwdowns and also offers his valuable suggestions.

Although India have only four players from their 2011 World Cup winning squad, Kirsten will be well aware of the their processes. The likes of Rohit Sharma, Shikhar Dhawan, Umesh Yadav and Ravindra Jadeja were not a part of the 2011 squad, but have been in the Indian team when Kirsten was coach. READ: Russell Domingo plays down South Africa’s unbeaten history against India

Speaking about Kirsten, South Africa coach Russell Domingo said, “Gary is an experienced coach — he has been with the side for a long period of time. He knows when to give some information and when not to give some information. So we have had informal discussions over cups of coffee and over dinners where we have discussed how we would like to go about the business and they are very comfortable in the space and understand what input they feel they need to give.” South Africa continue to train while India take rest ahead World Cup match

However, Kirsten is not in permanently with the team and has come over for a few matches. Domingo said, “Gary has got a certain amount of days and we have allocated some what we see as important stages of the event that we think he can offer us a lot of advice. Also, once again, just having his presence around is a big source of inspiration and motivation for the team. This is an important two weeks for us, games against India, the West Indies and Ireland before going back to Auckland. Once we get through this Australian leg, we will reassess again and see when he will join us again.”

Kirsten will certainly be a crucial factor for South Africa as they look to maintain their unbeaten record against India in World Cups. The two sides met each other during the 2011 World Cup and that was the only game India lost during their victorious run. India and South Africa face off at the MCG on Sunday. 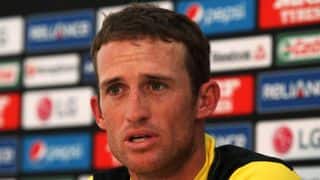