Currently, Sri Lanka are 74 for the loss of a wicket as Martin Guptill continues to bat on 26.

Sri Lanka veteran and opening batsman, Kumar Sangakkara was dismissed for mere eight by Tinashe Panyangara during the second and final-warm-up tie against Zimbabwe at the Bert Sutcliffe Oval in Lincoln on Tuesday. Currently, Sri Lanka are 74 for the loss of a wicket as Martin Guptill continues to bat on 26 and Mahela Jayawardene joins him and is batting on 30. Catch the live blog of the match here

Earlier, Sri Lanka won the toss and elected to bat first. This is a warm-up tie which would act as a dress-rehearsal to the mega event which is scheduled to get underway from Sunday, February 14 in Australia and New Zealand. 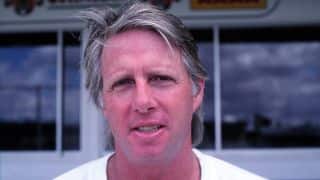 Don Bradman was the most remarkable batsman in history, admits Jeff Thomson South Africa may have extra pressure during ICC Cricket World Cup for not having a mental coach, believes expert