Pakistan's bowling stocks are being severely tested after Gul was ruled out.

Sydney: Pakistan were hit by a fresh ICC World Cup 2015 injury scare on Monday when fast bowler Sohail Khan was sidelined by a calf problem during a warm-up game against Bangladesh.ICC Cricket World Cup 2015: POINTS TABLE

The 30-year-old, a surprise inclusion in the squad, bowled six overs and took one wicket before he walked off the field at Sydney’s Blacktown Olympic Park Oval.On Sunday, opener Mohammad Hafeez also withdrew from the 15-man squad with an ankle injury as fitness problems mount for the 1992 champions.ICC Cricket World Cup 2015: SCHEDULE & MATCH DETAILS

“Sohail suffered a cramp in his calf muscle and as a precaution he did not bowl after six overs,” said a team media officer.

“He can still run without any problems and we hope he will be fine soon.”

Pakistan’s bowling stocks are being severely tested after Gul was ruled out before the squad was announced and Junaid Khan had to withdraw later.Star spinner Saeed Ajmal’s remodelled action was declared legal on Saturday but the ruling came too late for his inclusion in Pakistan’s squad. Paceman Rahat Ali and opener Nasir Jamshed have been given late call-ups and will join the squad on Wednesday. Pakistan will play another warm-up game, against England, on Wednesday, before opening their World Cup campaign against arch-rivals and defending champions India on Sunday.ICC Cricket World Cup 2015: Complete Coverage 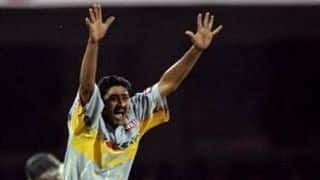 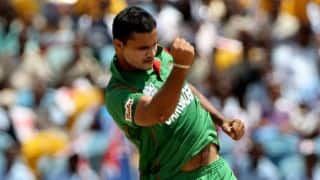