Asked about rumours around rift between Dhoni and Kohli, Shastri brushed them aside.

Perth: India‘s stunning turnaround of fortunes in the cricket World Cup may have surprised many but not team director Ravi Shastri, who says the “script went on expected lines” as he had full faith in the players’ abilities. ICC Cricket World Cup 2015: POINTS TABLE

India entered the quadrennial extravaganza following a winless tour Down Under and the defending champions were far from being called favourites to retain the title.

However, Mahendra Singh Dhoni‘s outfit proved their credentials with two convincing wins against arch-rivals Pakistan and a strong South African team. They have won all their three matches so far with emphatic margins and are now almost certain to qualify for the quarter-finals as the top team from Group-B.

“I am not at all surprised. In fact, why should I be surprised that the team has started on a magnificent note. I had complete belief in the boys and their abilities,” Shastri told PTI in an exclusive interview today. Top 10 fielders in ICC Cricket World Cup 2015

“It was a case of performing to their potential and that’s exactly what has happened in the two matches against Pakistan and South Africa. If you ask me, the script went on expected lines,” the former Indian captain said.

According to him, the break after a disastrous tri-series campaign, which came on the back of 0-2 defeat in the Test rubber, did the trick for the Men in Blue.

“I think the team was mentally drained after playing the tri-series. The boys needed to recharge their batteries and freshen up for the World Cup. The break from cricket did them a world of good as they came all guns blazing when it was required. And frankly speaking, I believe that this tri-series that we played was sheer waste of time and energy.” Top 10 wicketkeepers in ICC Cricket World Cup 2015

Besides batting and bowling, the Indian fielders have caught the eye with their athleticism on the field, prompting Shastri to go to the extent of calling them one of fittest units in the world. He said this in relation to a question on the 1985 victorious campaign in the Benson & Hedges World Championship, where the former all-rounder was at the forefront.

“I don’t love looking back too much into the past nor am I interested in looking too far ahead. But I would like to say this with conviction that this is the best Indian fielding unit that I have seen in many years. This team has some amazing fielders and they are among the fittest in international cricket,” he said.

“I think that will be putting too much burden on one individual. He should be allowed to play freely and express himself in the best way possible,” Shastri said when asked if Kohli is destined to break all international batting records.

“As far as I am concerned, I have never seen any Indian batsman perform better than Virat on Australian soil keeping Sachin Tendulkar and VVS Laxman in mind as they have done exceptionally well.

“I mean show me one Indian batsman who has scored four centuries in four Test matches. He has been phenomenal. He was dominant and that’s the reason we carried the attack back to Australian camp in all the Test matches.” Top 10 batsmen in ICC Cricket World Cup 2015

Asked about rumours around rift between Dhoni and Kohli, Shastri brushed them aside.

“I have little patience or time for nonsense that’s spread around. Frankly speaking, I care two hoots about skeptics or doubting thomases spreading some stupid theory. Neither me nor the players are bothered about these stuff.”

“If someone feels that he wants to waste his time discussing these issues, they are free to do so. And you will know why the players are least bothered about these issues. Because they all sleep well at night as their conscience is clear.” ICC Cricket World Cup 2015: SCHEDULE & MATCH DETAILS

Asked about who controls the Indian cricket team, Shastri categorically stated that it’s Dhoni who calls the shots.

“Mahendra Singh Dhoni is the undisputed leader of the Indian cricket team. He has been the boss for last eight years. He has been pro-active and has always led from the front.”

“He has been a terrific limited overs cricketer. He has won matches for India and is a calming influence in that dressing room. He has earned respect from his colleagues because he is a true leader,” he said. ICC Cricket World Cup 2015: Pool-wise Team Standings

“I don’t know about others but Mohit’s performance is at least not surprising for me. I saw him first in England and was impressed with whatever little I saw. And then you have to give it to Mohit as he has utilised his chances to the fullest.”

“He waited for his opportunity and when he got it, he grabbed it with both hands. In fact I am very proud of our fast bowling unit. All three bowlers can hit the 140 kmph. It’s sad that we go gaga over opposition bowlers who hit 140’s but not our boys who are equally capable.”

Asked about injuries to Ishant Sharma and a few others just ahead of the tournament, Shastri said, “Injuries are always a worry but it’s part and parcel of a sportsman’s life.”

Well, some of the injuries were such that it would have recuperated with adequate rest and that’s precisely what has happened. Ishant’s injury was certainly unfortunate.

“He is an experienced campaigner and we would have loved to have him lead the attack. But I would laud Ishant for the fact that he didn’t hide anything. He could have stayed on but he was honest and upright to come up and intimate the team management about his injury.”

Finally, asked about his role in the team, Shastri said his message to players was to just enjoy every moment of the game.

“I told them to enjoy every moment of international cricket. The key ingredient of success is enjoyment. I told the boys that take one game at a time rather than thinking about the destination. That’s what the team has been doing.”

“These players are professionals and they know their job. My job is to be by their side and support their endeavour,” he added. ICC Cricket World Cup 2015: Complete Coverage 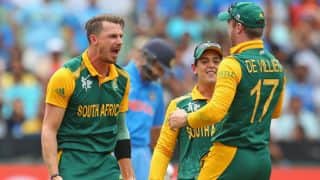 South Africa vs Ireland, ICC Cricket World Cup 2015, Pool B, Match 24 at Canberra: Ireland five down as Kyle Abbott gets his 3rd wicket