Colombo: Sri Lankan cricket team’s selection panel headed by former captain Sanath Jayasuriya today resigned following the recent revamp of the SLC administration. The Jayasuriya-led panel’s term was nearing completion but the new interim committee had hinted at not giving an extension to the current lot of selectors. His tenure was originally due to end on March 31, but with the postponement of the Sri Lanka Cricket elections, was extended by a further month. Sri Lanka Cricket to be run by interim committee following allegations of corruption

In his resignation letter to Sports Minister Navin Dissanayake, Jayasuriya says, “I am extremely proud and happy that during my tenure Sri Lanka was able to emerge world champions in T20, win the Asia Cup and a long awaited series against England. I am always available if Sri Lanka Cricket needs me to serve the country in the future. I take this opportunity of wishing the National team and Sri Lanka cricket all success in their future endeavors.” Kumar Sangakkara and Mahela Jayawardene: Cricket’s most iconic bromance

On April 1, a new interim committee took up cricket administration after the sports minister fired the body headed by Jayantha Dharmadasa. Former Sri Lanka cricketer Sidath Wettimuny has assumed duties as SLC chairman. It was learnt that Jayasuriya came under fire for his selection in the quarter-final of the recently concluded ICC Cricket World Cup 2015, where Sri Lanka lost in a lopsided contest against South Africa. Read: Sri Lanka in ICC Cricket World Cup 2015: Marks out of 10 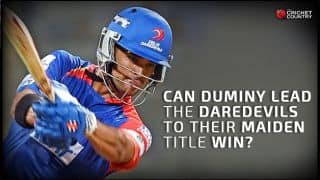