Holder's prediction received a major boost when both Gayle and Russell looked at ease in the nets.

NOTTINGHAM: West Indies captain Jason Holder revealed on Wednesday that Chris Gayle and Andre Russell, who faced injury concerns during the Pakistan tie, have made steady recovery and will most likely remain available for the Australia clash.

Russell bowled three steamy overs against Pakistan before going off the field due to some issue in his left leg. Gayle, meanwhile, was seen favouring his lower back, which has repeatedly caused him trouble throughout the latter part of his career. However, given the recovery they have made coupled by West Indies getting a five-day break in between, Holder is hopeful of Gayle and Russell to play Thursday.

On the eve of the match, Holder’s prediction received a major boost when both Gayle and Russell looked at ease in the nets, with the “Universe Boss” even rolling his arm over and sending down a few off-spinners.

“We’ve had a few days off. They have been recovering quite nicely,” Holder said. “We expect both of them to hopefully be fit and ready to go tomorrow. We’ve still got some more time until the game tomorrow morning, so then we’ll make a final decision in the morning.

“I think the beauty with both of those guys is they’ve played enough cricket. We just tend to trust them, take their word and then make a final determination then. Chris was at practice for the last couple days, so Chris for me is all well and ready to go. Andre will be obviously assessed today, and we’re very, very hopeful that he’ll be fit tomorrow.”

Holder played up the rivalry between West Indies and Australia, two teams who have single-handedly dominated two respective eras, believing this is the closest the two units have been in terms of quality and promise shown in a long time.

While Australia are playing their first game in Nottingham since the hammering they received at the hands of England last year, which saw the No 1-ranked team in the world pile a record 481, West Indies promise to head into the encounter high on confidence on the back of a supreme performance against Pakistan.

“We obviously had one game here before. We bowled 22 overs in the game and so we didn’t get a full allotment,” he said. “But having said that, we’ve got a little bit of knowledge about the ground, how the wicket plays, but there are quite a few strips on this square.

“I’m not sure which one we’re on tomorrow. I just think it’s a situation whether we bat or bowl first, we need to assess the conditions as early as possible and then play to suit.”

Holder himself, along with Oshane Thomas and Russell, inflicted serious damage on Pakistan, with a barrage of short-pitched bowling, rolling them over for just 105. Holder maintained that the ploy of bowling short is not the only tactic he would want to employ, whilst hoping his batsmen would turn out fearlessly against an equally-threatening Australian bowling unit.

“I guess it all boils down to the conditions. One thing I said in the last press conference is that we tend to formulate our plans to each batter,” Holder said.

“We just want to be as positive as we possibly can be. I think whether we bat first or if we chase, we’ve got to show intent. Intent is something that we spoke about in the dressing room, and it’s something that we want to go about our goal with when we go into our innings. Yeah, I don’t want to get too caught up with the conditions, but at the end of the day I just want the guys to show intent and be fearless.” 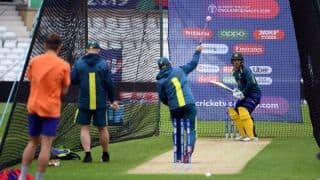 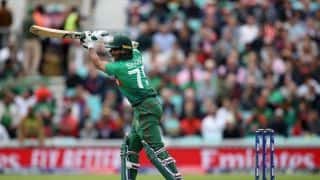