Alex Carey has put a positive spin on the jeers the pair of Steve Smith and David Warner drew during their World Cup warm-up clash vs England.

Australia wicketkeeper Alex Carey has put a positive spin on the jeers the pair of Steve Smith and David Warner drew during their ICC World Cup warm-up clash against England.

Both Warner and Smith were booed as they came out to bat with chants of ‘cheats’ welcoming the former Aussie captain.

The duo was banned for a period of 12 months following their involvement in the ball-tampering scandal in South Africa last year. Their ban ended in March this year and played their first game in Australia colours during a three-match warm-up series against New Zealand earlier this month. Saturday’s warm-up match was the first time Australia took field in England and they were already expecting and fully prepared for the hostile reception from the home crowd.

Carey though feels that it will only add to the atmosphere. “I think it s a great atmosphere. It just adds to the game,” Carey was quoted as saying by Reuters. “I think we knew it was going to happen. It s one way to answer it, isn t it? Make a hundred and Davey got 40 as well. We knew that we were probably going to get that reception and the guys handled it really well.”

While Smith scored a match-winning century, hitting 116 off 102, Warner scored 43 off 55 as Australia beat England by 12 runs. They will face South Africa in their second practice match on Monday.

Carey himself played a handy knock of 14-ball 30 providing a late surge that helped Australia to 297/9 while sharing a brisk 42-run partnership with Smith for the sixth wicket.

Carey was all praise for Smith. “He’s got his mannerisms but he s a ripper. He s very calm and he knows what s going on out in the middle. He runs hard between wickets, he s really busy and I really enjoyed that,” he said. 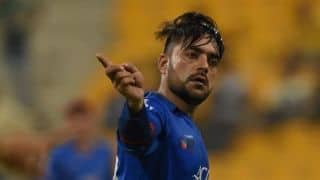