It was here in Nottingham last year that Australia suffered their heaviest defeat in a one-day international when England bulldozed them by 242 runs.

NOTTINGHAM: It was here in Nottingham last year that Australia suffered their heaviest defeat in a one-day international when England bulldozed them by 242 runs. More than a year removed from that forgettable hammering, Australia return to the Trent Bridge cricket ground in their second World Cup 2019 game, having beaten Afghanistan by seven wickets. In front of them, lay a buoyant West Indies unit, who haven’t had a bad opener themselves.

Unsurprisingly, bouncers and short-pitched bowling have been the order of the day when it comes to net sessions leading into Thursday’s contest. Steve Smith and Glenn Maxwell underwent a light Australian practice session where they were dealt plenty of bouncers from the local bowlers and coach Justin Langer. There were no signs of David Warner though even as almost all the recognised batsmen had a go in the nets.

For Australia and West Indies, the two most dominating teams of two different generations, this is the most even they’ve been in recent memory. Aaron Finch and Jason Holder, the two captain, acknowledged the firepower in their opponents and expected the contest to be an exciting one. Neither captain hinted much of a change in their line-ups.

The temptation of Nathan Lyon getting a place in the Playing XI is understandable. Then again, the boundaries of Trent Bridge are comparatively shorter than the remaining venues in England. Even Finch played up the idea of not changing his side much this early in the tournament.

West Indies were as clinical as a team can get. Their pacers set the tone so expect that line-up to remain unchanged. Kemar Roach was seen sending down some thunderbolts to the batsmen so the only change likely to take place is him coming in to replace Sheldon Cottrell. The batsmen didn’t get to do much so expect a similar line-up.

– Nine of the last 10 ODI games played out between Australia and West Indies have been won by the Australians (L1); they haven t faced off in this format since 2016 however.

– West Indies have registered victories in four of their five ODI matches played against Australia in England.

– This game will be the 800th recorded for West Indies in ODI cricket.

– Mitchell Starc is four wickets away from becoming only the 10th bowler to pick up 150 for Australia.

– Chris Gayle has managed to post six ODI half-centuries in succession ahead of this contest.

“I think the beauty with both of those guys is they’ve played enough cricket. We just tend to trust them, take their word and then make a final determination then. Chris was at practice for the last couple days, so Chris for me is all well and ready to go. Andre will be obviously assessed today, and we’re very, very hopeful that he’ll be fit tomorrow.” – Jason Holder is positive about Gayle and Russell’s fitness

“None. I think just before we turned up to the training yesterday, a few boys talked about their previous experiences here, which obviously haven’t been overly pleasant, but we’re in the home change rooms, which is a first for everyone, which is nice.” – Aaron Finch mentioned there hasn’t been any discussion about Australia’s last visit to Trent Bridge 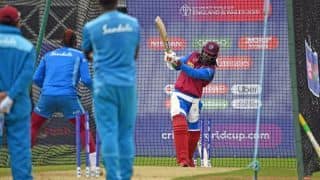