Finch indicated that Australia would go after Gayle, trying to target the batsman's weakness.

NOTTINGHAM: “It’s always a great challenge playing against Mr. Worldwide or whatever he calls himself”

“Oh Starcy will knock his off pole out. It will be easy. I think you have to be aggressive at him. He’s still smacking them, but he’s getting older. I don’t know if he’s faced much of Starcy and Paddy recently but they’re bowling quick”

The above two statements came from Pat Cummins and Nathan Coulter-Nile when asked how Australia plan on tackling the threat of Chris Gayle during their game against the West Indies on Thursday. Judging by their comments, Australia re supremely confident about getting Gayle, who got his World Cup campaign off with a half-century against Pakistan in West Indies’ winning start.

But while Cummins and Coulter-Nile were a bit more straightforward about their opinion of the “Universe Boss”, their skipper Aaron Finch offered due respect to his damage-inflicting ability with the bat. He however, indicated that Australia would go after Gayle, trying to target the batsman’s weakness, provided there is any.

“Well, each bowler will have individual plans. I think when you come up against someone as dangerous as Chris, you have to be prepared, like I said before, that he’s going to hit boundaries. So it’s about trying to attack his weaknesses early and making sure that we’re putting the ball in the areas that we want to be bowling,” Finch said on the eve of the match.

“I think if you’re – again, if you second-guess yourself, if you’re a bit tentative, if you’re a bit nervous with the ball in hand, he’ll get all over you, and once he’s going, he’s so hard to stop. So I think it’s important that you come prepared to take the contest to him because he definitely does that the other way.”

While Gayle has been a force to reckon with against all line-ups in the world, his record against Australia gives the five-time winners slight advantage over him. In 31 ODIs against Australia, Gayle has scored 802 runs, averaging a shade under 27. Glaringly, Gayle is yet to score a century against Australia and they’re aware how badly he’d want that to change in his final one-day international assignment.

“Those stats would be over a really long period of time, so it’s hard to put a definite reason why because you might play two games here – and with some injuries that Chris has had the last time that they played in Australia was a few years ago, and he played the first two and then didn’t play the rest of the series. He had a back issue,” Finch said.

“So it’s tough to put something right on it, to say this is the reason why. It’s just it comes down to some good planning, no doubt, but also one or two games here and there over a long period of time, it probably doesn’t give you a full picture, either.”

West Indies and Australia last faced each other in a tri-series in the Caribbean in late 2016, which the five-time winners won by beating the Windies in the final. As far as the World Cup goes, both sides have started their campaign emphatically, registering seven-wicket wins over their respective opponents. Against Pakistan, West Indies set the tone in the first 10 overs. Hence, aware of what this promising West Indies outfit is capable of, Finch mentioned the key for Australia would be to start well.

“They’re a very dangerous side, and I think whichever team comes out and executes it from the start of the game, I think it’s important that you start really well, whether you bat or bowl first in the first 10-over periods are going to be really crucial, because we how damaging West Indies can be during that period,” he said.

“But also, equally, I think if we get off to a good start, then we can start to try and to get into our work a bit. I think if we are tentative and if we are a bit standoffish and wait for things to happen, that’s when they can dominate you from the start. It’s important that you turn up with the right attitude and the right intent in them first 10 overs, bat or ball.”

Finch indicated that Australia are likely to stick to the same, winning side which played against Afghanistan.

“Probably not at this stage,” Finch stated. “I think we’ll sit down and have a chat about it as a selection group after training. Got some guys that are still finishing up training now, but yeah, looks like a pretty similar wicket to what we expected it to be.” 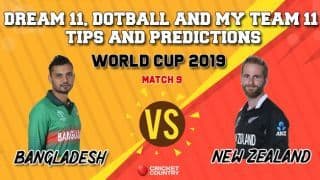 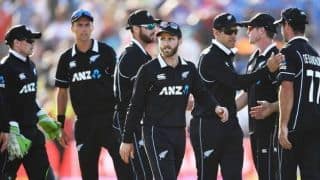