South Africa batting coach Dale Benkenstein has warned his side to adapt to the demands of World Cup or face an embarrassing exit.

South Africa batting coach Dale Benkenstein has warned his struggling side to adapt to the unique demands of the World Cup or face an embarrassing exit. The Proteas are battling to avoid their worst ever World Cup performance after losing their first three matches before Monday’s washout against the West Indies.

With minnows Afghanistan next on the schedule in Cardiff on Saturday, Benkenstein says South Africa’s players must learn how to prepare for the challenge on playing different opponents in each match. The World Cup’s round-robin group stage, where all 10 teams play each other once, is far different from the usual block of matches against the same opponent that national sides have on their tours.

So far, they have failed with the challenges posed by England, Bangladesh and India. “The difference in tournaments to international cricket is that in regular series you play the same opposition four or five times so you have an opportunity to start slow, to sum them up and then you can take them down,” Benkenstein said.

“Here, you are playing one-off games. You are playing on different wickets and against different teams in every match. I really feel we are one game away from getting things right. Then the confidence levels will be up there and we may peak at the right time.”

South Africa have never faced Afghanistan in an ODI before and must win to keep alive their slender hopes of qualifying for the semi-finals. Benkenstein wants to see the batting line-up spend more time at the crease, especially as no South African batsmen has scored a century in the tournament.

“The message is that the batters have got to step up and we haven’t,” he said. “I feel like we are batting well but we just haven’t done it long enough. Everyone has got in. We’ve had opportunities to have hundred partnerships and win matches but we haven’t done it. Sometimes we don’t get that balance right. We try and accelerate maybe a bit too fast rather than getting our heads down and ticking it over.” 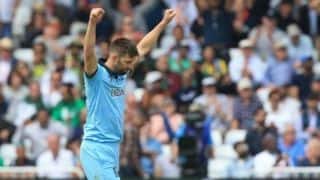