Emphasising on the importance of dot balls in limited overs cricket, Pat Cummins is delighted that the hard work he has put in is paying off.

Emphasising on the importance of dot balls in limited overs cricket, Australia pacer Pat Cummins is delighted that the hard work he has put in to become accurate is starting to pay off.

Cummins is increasingly looking like the workhorse of this Australian team, plugging away with the wickets while others hog the headlines. The 26-year-old looked in great rhythm against Pakistan, taking 3 for 33 to derail their chase.

The right-arm pacer has bowled the most number of dot balls in the ongoing World Cup and the two bowlers that follow him are also from Australia — Mitchell Starc and Nathan Coulter-Nile.

“That’s the big improvement in my game in the last couple of years, the ability to hold a length and make it difficult to get runs,” Cummins said after Australia’s 41-run against Pakistan on Wednesday.

“If you give away easy singles then 300 becomes quite an achievable score. Cutting out the singles is huge, it means if you give away a boundary it might not be that big over of ten or 11, it may just be a five or a six,” Cummins added.

After they were set 308 for win, Pakistan scored steadily but Australia held their nerve and took wickets at regular intervals.

An eighth-wicket stand between Sarfaraz and Wahab Riaz, who scored 45 from just 39 balls, made it nervy for the defending champions until the last three wickets fell for just two runs – securing a third victory at the World Cup.

“It goes to show that everyone can bat these days. It was a bit closer than we would have liked, so it was good to get those couple of wickets and finish it off. We gave them a bit too much width and suddenly they were back in the game, it’s a good lesson to learn,” Cummins said.

Cummins and his strike partner Starc have 18 wickets between them in the tournament while the rest of the team have a combined 12.

Australia set a target of 307 on the back of a 146-run opening partnership between Warner (107) and Finch (82). Warner scored his first century post his one-year international ban for ball-tampering.

“We were so pumped for him, he was really open and honest after the Oval game. He was playing more timid than normal but we saw his mindset change from the start here.

“I think if you look over the transition of his career, he’s become more measured in his approach. His energy out in the middle is still an example, the way you see him sprinting hard for singles and bouncing down the wicket. He looks really sharp in this tournament.” 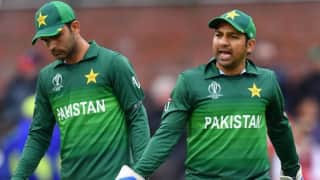 WATCH: On 14th July I want to have World Cup in my hand – Hardik Pandya