South Africa allrounder Chris Morris pleaded with fans at home to keep backing the team after a six-wicket loss to India on Wednesday.

South Africa allrounder Chris Morris pleaded with fans at home to keep backing the team after a six-wicket loss to India on Wednesday saw the Proteas suffer a third defeat in as many matches at the World Cup.

The Proteas’ hopes of qualifying for the semi-finals from the 10-team round-robin pool phase are already hanging by a thread after a reverse that followed a 104-run thrashing by hosts England in the World Cup opener and a surprise loss to Bangladesh.

“It’s pretty simple: lose three in a row at the World Cup, and you need to win every game from now on in,” Morris told reporters.

“But the guys know what needs to be done, they are disappointed and a little bit angry,” he added. “We’ll sort that out in our heads tonight and when the sun comes up we’ll go again. It’s pretty simple: win the next six and crack on.”

Morris made 42 batting at No 8 in a meagre total of 227 for nine following a top-order collapsed sparked by Jasprit Bumrah‘s double strike and continued by spinner Yuvzendra Chahal, who took four wickets. The lively paceman then bowled well but without much luck in a return of one for 36, as India cruised to victory on the back of opener Rohit Sharma‘s 122 not out.

This was India’s first match of the tournament compared to the Proteas’ third after an Indian court ruled there had to be a rest period for Virat Kohli’s men between the end of the Indian Premier League and the start of the World Cup.

“The schedule has been a bit tough,” admitted Morris. “Mentally we are pretty fresh, it’s quite draining to go three down. But I think we’ll be okay, there’s a lot of strong-willed guys in that team.”

He added: “The fans at home, all we can say to them is ‘stay with us, back us as much as we can and we’ll try and perform for you'”.

‘Learn when you lose’

But with the Proteas back at Southampton to face the West Indies on Monday, Amla said he hoped they had learned some valuable lessons about a lively pitch.

“Generally you learn more when you lose, although we would have loved to win,” said Amla. “We know how the wicket will play — we anticipated it would be higher-scoring but it gave more assistance to the bowlers than we thought. It nipped right until the end, it wasn’t a 300 type of wicket probably close to 250, 260.”

Amla missed the Bangladesh defeat as a precaution after being hit on the head by a sharp bouncer from England fast bowler Jofra Archer. But he insisted there were no lingering effects against India that caused him to edge Bumrah to Sharma in the slips.

“I was feeling great. As a batsman that’s just part and parcel, you are going to get hit — it’s not the first time and it won’t be the last,” he said with a laugh. 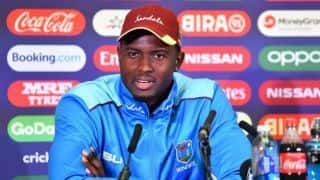