MANCHESTER: England are on a “red-hot” run in the World Cup having notched up emphatic back-to-back wins against Bangladesh and West Indies but their captain Eoin Morgan is not making the mistake of taking Afghanistan lightly. Many assumed Afghanistan to spring a couple, if not more, surprises at the World Cup and expected them to beat a higher-ranked opposition.

With four straight losses, so far it hasn t happened. But Morgan doesn’t believe it can’t against his England, whom Afghanistan face on Tuesday.

“I would like to think in a couple of games so far we’ve been head hot favourites and underlining our preparation is the humility and the gratitude with which we go about things, and that’s an important part of trying to beat teams like Afghanistan,” Morgan said.

“We went through the same process in the warm up game. They are a strong side. I said previous to the tournament, they will beat teams in this World Cup. They haven’t managed to do that yet. So that makes tomorrow, you know, a tougher challenge.

Almost out of the World Cup, Afghanistan may be struggling to get their act together but in England, they might sense an opportunity. The World Cup co-favourites have been hit by a couple of injuries with Jason Roy s hamstring tear ruling him out for two-three matches. Morgan himself was in doubt due to a back spasm, but reasserted that he should be fit to take the field Tuesday.

“Yeah, drastically improved. I’ve had extensive treatment and medication the last two days, which have helped me no end. I’ve had a small hit in the nets, and hopefully be fit to play in the morning. It will all depend on how I pull up but aiming to play tomorrow. I’m positive about playing. So unless I pull up worse tomorrow, I’ll be playing,” Morgan said.

Although Roy s injury comes as a setback for England, the availability of James Vince, who as per Morgan would definitely open the innings is a bit of a relief. That said, Vince s inclusion might be temporary since Morgan was optimistic about the door not yet closing completely on Roy s World Cup campaign. The skipper felt Roy would recover in time for the clash against Australia a week from now, but in case he doesn t, the opener should definitely recover to take on India on June 30.

“I certainly believe Jason will play again in this tournament. At the moment he’s going to be assessed continuously over the course of the next week. He’s out of the next two games. So we’ll see how he pulls up after that,” Morgan said.

“If not Australia, maybe the following game. As we know with injuries, people respond differently to treatment and medication, so it’s a matter of seeing — giving him enough time to allow him to get himself back into the tournament.

“He (Vince) is replacing Jason Roy tomorrow at the top of the order. He will definitely open the batting, yeah.”

Tuesday s game, if the weather permits, will be contested on the same strip where India played Pakistan Sunday. It was a proper English wicket which was brown and had no grass cover. With Adil Rashid being the lone spinner against West Indies, the possibility of England including Moeen Ali is strong, especially considering how much of a purchase Kuldeep Yadav got against Pakistan. Morgan, however, opted to remain tight-lipped.

“I think having watched the game, India – Pakistan. It offered enough I think for both. I think with the seam it went through and bounced quite nicely, and then it turned a little bit with the spinners. So we’ve just been out to look at the wicket. It still hasn’t been like dressed up, prepared and rolled so we’ll have another look again in the morning as to what balance of bowling line-up we’ll go with,” he said.

“I think it’s a reasonable place for everybody to get some form. It seems to be the nicest place to bat at the moment. But I mean, if we manage to qualify, we’ll look at players and how they are going and what sort of time in the middle or bowling they need to get under their belt for later stages but our first priority at the moment is trying to get into that top four slot.” 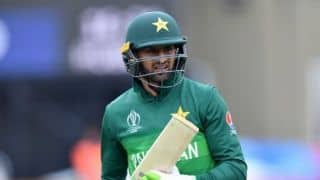