Australia launched their World Cup campaign with an efficient victory over Afghanistan -- and appeared totally unfazed by the hostile reception.

Australia launched their World Cup campaign with an efficient victory over Afghanistan — and appeared totally unfazed by the hostile reception given to Steve Smith and David Warner. A seven-wicket win in Bristol against the 10th-ranked nation in one-day international cricket on Saturday set the reigning champions on their way in the competition, though they know there will be tougher tests ahead.

Australia had their opponents on the ropes at five for two but the Afghans rallied and reached 207, even though they failed to bat out their 50 overs. David Warner top-scored for Australia with 89 not out in his first official international match after completing a one-year ball-tampering ban as they reached their target with more than 15 overs to spare.

But both Warner and Smith, also banned over the “sandpapergate” scandal, were subjected to jeers from the crowd after suffering a similar fate during last week’s warm-up match against England. Two fans even watched the game in Bristol from a balcony dressed as sandpaper in reference to the scandal last year in which Australia hatched a plot to use the material to alter the condition of the ball during a Test match in South Africa.

Legspinner Adam Zampa, who took three wickets, said Australia were prepared for barracking from spectators throughout the tournament. “We have spoken a bit how we are going to handle that situation,” he said. “Obviously, we copped it in the warm-up game against England, too. But I think we are expecting it. And to be fair, I think everyone’s handling it really well.”

Zampa said he did not think Warner and Smith would necessarily feed off the negative vibes from the crowd, but instead were shutting them out, praising them for the way they were handling themselves.

“Personally, I don’t really hear the crowd to be honest,” he said. “So I think if you can block it out, you don’t really hear it. As I say, the guys are handling themselves really well. We spoke about it during our camp in Brisbane, about how we are going to react to it and how we are going to handle it and we haven’t spoken about it since. I think we expected that we were going to cop it and I think all of us, to our credit, are just getting on with the job. You heard the boos today when Smithy went out there.

“Call it what you want, disrespectful, or just a part of the game. Either way, I think the way that us as players are handling it has been great. If you let it get to you, I suppose that is when something will happen.”

Allrounder Marcus Stoinis, who took two wickets, said both Smith and Warner would shut out the booing, adding that the situation was “out of our control”. “They’re professionals,” he said. “They don’t need any more motivation and they will just go about their business.”

Australia, who next face the West Indies at Trent Bridge on Thursday, endured a torrid 2018 in one-day internationals but appear to be peaking at the right time as they chase a sixth World Cup. They came out on top in their series in India earlier this year before humbling Pakistan 5-0 in the United Arab Emirates. 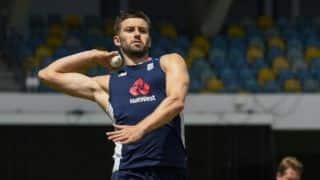 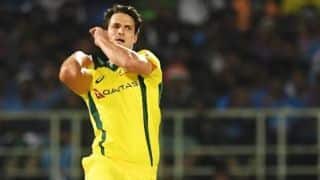