Vijay Shankar says taking wickets against Pakistan has been a confidence-booster for him.

India allrounder Vijay Shankar says taking wickets against Pakistan has been a confidence-booster for him as he hopes to be fit enough of taking the field against Afghanistan on Saturday.

Shankar, who replaced Dhawan in the Pakistan game, impressed with the ball, picking up a wicket off the first ball in his maiden World Cup appearance.

Shankar, coming into bowl during the fifth over, got the ball to swing back into Imam-ul-Haq and had the Pakistan opener trapped in front. Shankar picked up two wickets in that game.

“Feels great to play for your country. The World Cup happens every four years. Getting wickets in the last game, especially against Pakistan, my World Cup debut against them, gave me a lot of confidence,” Shankar said.

Virat Kohli-led India have so far won three of their four games convincingly, with the one against New Zealand being washed out without a ball bowled. In their opener, the Men in Blue beat South Africa by six wickets to follow it up with a 36-run victory over fellow favourites Australia. Against arch-rivals Pakistan in the big-ticket clash, India romped to a 89-run win (D/L method) in a rain-affected tie.

“It’s not about who we’re playing. We look to get better. It’s about how we play against each individual,” Shankar said when asked about India’s next opponent Afghanistan who have had a forgettable campaign thus far.

Shankar was hit on the toe during a rain-hit training session, was forced to skip training on Thursday.

“Personally, I’m hopeful of playing. Someone like Jasprit Bumrah, you expect it in the nets (to get hit), you have to be ready,” Shankar said in the pre-match media interaction.

India are already without Shikhar Dhawan who has been ruled out of the tournament with a fractured thumb. Pacer Bhuvneshwar Kumar is also out for eight days and will only be in contention for the England game (June 30) in Birmingham after suffering a hamstring niggle against Pakistan. 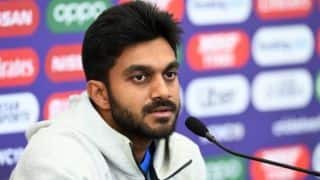 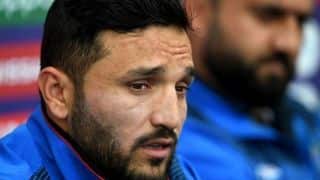