India's pace spearhead Jasprit Bumrah doesn't feel that he has built some kind of reputation that he needs to live up to.

Jasprit Bumrah has been a nightmare for all international batsmen but India‘s pace spearhead doesn’t feel that he has built some kind of reputation that he needs to live up to. With a simple six step run-up and with an unusually slinging action, Bumrah is skipper Virat Kohli‘s ‘Man Friday’ in all formats but for the genial Punjabi from Gujarat, it is all about being a good student of the game.

“Most of the times, I don’t think about expectations. I just try to check what exactly does the team wants me to do. I don’t think that I have a reputation to live up to as I just need to keep things simple,” Bumrah, the world No.1 in ODIs, said after playing a pivotal role in India’s six-wicket victory.

“I always keep an eye on what is happening all over, so that maybe I can learn and add things to my armoury. There’s no harm in learning. For example, if you tell me there’s a perfect action in the world, I’ll try to copy that,” he said.

Bumrah bowled “hard, Test match lengths” to South African batsmen that worked for him, something that his skipper attributes to his success in the longest format.

“He believes the length ball is something that he can nick people off with, whether it is assisting bowlers or not. The way he’s bowling right now, it’s so, so good to see because you can see batsmen literally clueless against him and he’s rushing people,” skipper Kohli was effusive in his praise.

“To be honest, I haven’t seen Hashim (Amla) get out like that in one-day cricket. He’s been so dominant,” he added.

For Bumrah, preparation is something which is non-negotiable and he executes a plan in a match situation only when he has successfully implemented it at the nets.

“There is a lot of hard work that goes behind the cameras. I do all my sessions, be it bowl with a new ball or new variations before coming into the match. If I have prepared everything, then it’s about the execution, keeping a clear head space,” said the 25-year-old.

Bumrah’s style of doing homework is something that fascinates even his skipper. Kohli knows that with Bumrah, the philosophy is simple, “You get what you see”.

The skipper then gave an example of how difficult it is to face him at the nets as he bowls with the same intensity which is on display in a match situation.

“Well, one thing you know while facing Jasprit is that you have to play good cricketing shots and back your technique against him. Because if you are hesitant a little bit and he is able to sense that, then he is all over you.

“If he senses someone is not enjoying the short ball in the nets, he will make sure that guy gets it in that session,” Kohli gave an insight to the mind of his premier bowler.

“So, what you see him bowling in the match, he bowls exactly like that to us in the nets. He doesn’t care who is standing in front of him. He will bounce people, try to get them bowled or may be york people with the new ball.

“That’s the reason for his consistency. He doesn’t change his game because he’s in the nets compared to the game,” the world’s best batsman had some delightful words for his junior colleague.

In fact, the skipper feels that playing Bumrah in the nets, gives batsmen more confidence to face other bowlers in actual match situation.

“For a batsman, it’s beautiful to face a guy who bowls with match intensity and he’s looking to get you out, so when you play well against him you walk out with more confidence,” he said.

At the highest level, what matters is the mindset of a youngster and the skipper knows why his lethal weapon is so special.

“He has the right attitude towards the game and he’s going to be a massive factor for us here,” Kohli said. 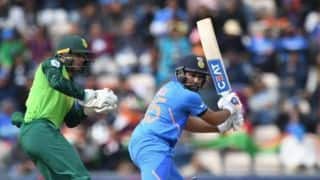 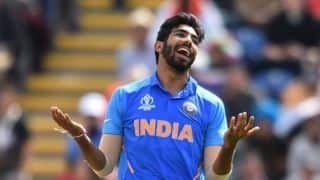