Rohit added 136 for the opening wicket with Rahul, India's highest first-wicket partnership against Pakistan in World Cups across seven meetings.

MANCHESTER: Rohit Sharma has been batting like a dream in the World Cup 2019. He has gone past fifty in all three innings he has batted in, twice converting them into centuries. After his unbeaten 122 against South Africa got India off to a winning start in the tournament, Rohit struck yet another century his 24th in the format to lead India’s 85-run demolition of Pakistan.

Rohit has scored contrasting hundreds. His century against South Africa was a measured knock, one that skipper Virat Kohli lauded as Rohit’s best ODI knock. Against Pakistan though, Rohit was back to his fluent best, bringing up his 50 off 34 balls his quickest and the 100 off 84 balls, his second fastest. ALSO READ: Ruthless India crush Pakistan to maintain unbeaten World Cup streak

With a new opening partner in KL Rahul, Rohit added 136 for the opening wicket, India’s highest first-wicket partnership against Pakistan in World Cups across seven meetings and laid the base for India’s strong total of 336 for 5.

“As a batsman, when you are playing where the conditions are going to challenge you, you’ve just got to assess the conditions first because the pitch was under the cover for a long time. The last two days we were here, the pitch was under the covers, and it was a little soft when we started. So assessing the crucial phase of the innings, the first phase of the innings was important for us, and not to lose wicket at that point was very crucial,” Rohit said about his knock.

“So as a batsman, when you’re facing those kinds of conditions, your job is to assess and make sure that you don’t try and lose too many wickets up front because, when the conditions are like that, it becomes more of a new ball game, and then the opposition can put pressure if you lose a few wickets. So the idea was not to lose wickets and build a platform and try to take the game forward after that.”

Rohit has been on a roll. Last year, he scored over a 1000 runs and averaged over 50 in three ODI series for India. His scores of 23, 52, 83 not out, 111 not out and 48 in the Asia Cup was instrumental in India winning the title for a record seventh time. Rohit signed off 2018 with an unbeaten 152 and 162 against West Indies, making him the cricketer with the maximum 150-plus scores in ODIs. To top it, just a month ago, Rohit led his IPL franchise Mumbai Indians to a record fourth title.

“I think it’s just the space I am in right now. It’s a very good phase in my life. Having a daughter, a newly born daughter in my life actually has put me in a good space. So, yeah, I think I’m enjoying my cricket coming off a great IPL campaign and then starting off here. We always know how important it is to start well. So the focus was always on that to start well and then see where the team is heading and then the individual,” he said.

“So I think as a team we’re heading in the right direction. For us it is important to just keep ticking all the boxes, and I think, as a team, we have done that most of the time.”

The most eye-catching feature about Rohit’s knock Sunday was his brutal treatment to the short ball. He was severe especially on Hasan Ali, who tried to pepper Rohit with bouncers but ended up getting pulled over cow corner and slashed over point. Rohit pummelled 53 off 27 short balls, also including six boundaries at a strike-rate of 196, and through pulls and cuts, accumulated 58 runs.

“They started off really well, I would say. Of course, we know in England, once you’re in, it’s very hard for the bowlers to come back, and there’s not enough room for error. If you make an error, you’re going to get punished. That is pretty simple. We’ve seen it over the years in this part of the world,” said Rohit about Pakistan’s short-ball tactics.

“Of course, certain games, certain conditions will challenge you as a batsman, but it did us in the initial phase because the shot making wasn’t that easy, but I really can’t read into what was going in their mind, whether to bowl up or to bowl short. They did bowl up a fair amount, but then, again, as a batsman you are ready to just pounce on it when given or bowl to your strength, which I think is my strength when someone bowls short to me. But, yeah, I guess it is what it is.”

This was the first time Rohit opened the innings with Rahul for India, and despite surviving a couple of close run-out calls, the pair managed to notch up a century partnership. Rohit, who has mostly batted with Shikhar Dhawan during his time as an opener for India, admitted that batting with a new opening partner throws a few challenges.

“These are the sort of challenges you face – the understanding of when he wants to run that two, when I want to take that single, and things like that. These are very small little things, but of course, eventually they add up to a whole lot for the team because at that point we never wanted to get run out. That was the last thing in our mind to do that,” Rohit said.

“Yeah, those are the challenges, understanding the partner, what he’s trying to do, what is going on in his head at that point. Is he trying to take single or trying to go for a big shot? As a non-striker, you’ve got to be ready for all of that.

“But we had a lot of communication today while we were batting, so slowly we will build on it. Now that I know he’s going to open for the next few games as well. So that conversation between us is really, really important, and I hope that continues because it’s going to only help both of us. Openers starting well is very, very important. We know that. So that will play a big part in coming games.” 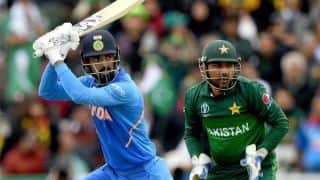