Ross Taylor feels that he can continue even after the upcoming World Cup if his body allows, taking inspiration from hard-hitting Chris Gayle.

Senior New Zealand batsman Ross Taylor feels that he can continue even after the upcoming World Cup if his body allows, taking inspiration from hard-hitting West Indies cricketer Chris Gayle.

Taylor, 35, is expected to take part in his final World Cup in England and Wales beginning on Thursday.

“I’m 35 but you never really know what’s to come. Chris Gayle is probably an inspiration – he’s 39 in this World Cup and I’m 39 at the next, so it’s not a simple matter,” Taylor was quoted as saying by the ICC.

Taylor scored 71 in New Zealand’s six-wicket victory over tournament favourites India in a warm-up match at The Oval here on May 25. “You never know, this will probably be my last World Cup but if these hamstrings and calves hold together then maybe I can be back in a few years,” he said.

Taylor said he was aiming to help the Kiwis lift their first World Cup after they reached the final four years ago, losing to Australia. “My approach to the World Cup is not necessarily a mindset of going out there just to enjoy it.

“You always put a lot of pressure on yourself in big tournaments – pressure comes with it whether you think about it or not, so it’s about managing those moments. I think you have to pace yourself in a tournament like this, it’s a long time and the way our schedule is, there are a lot of games at the start and a bit of a break in the middle.”

With the new World Cup format that pits every team against each other in a marathon of nine matches before the business end of the tournament, Taylor reckons managing workload will become vital.

“The way you rest and train between games is going to be very important. It’s going to be a lot tougher… Making the final four years ago we played a lot of games at home and we knew our conditions very well. If you get off to a good start and get onto a roll, you can get into those semi-finals and suddenly you’re only two wins away from winning it.”

He also warned that the Black Caps cannot get carried away with the warm-up tie win over India. “When it comes to a warm-up you just treat it as that and then get out of the game what you want to get out of it. For us, we haven’t played as a team for two or three months, so it was about going out there and testing our skills out against the best.”

New Zealand will begin their World Cup match against Sri Lanka on Saturday. 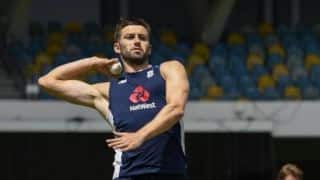 Mark Wood to be available for England's World Cup opener