Sunil Gavaskar has termed the injury to Shikhar Dhawan as a 'blow' to his team but hopes the left-hander will get fit in time for the big clash against England.

Former India captain Sunil Gavaskar has termed the injury to opener Shikhar Dhawan as a ‘blow’ to his team but hopes the left-hander will get fit in time for the big clash against host and ICC World Cup 2019 favourite England.

Dhawan copped a blow to his thumb during India’s second match of the ongoing tournament but went on to score a match-winning century. Scans later revealed a hairline fracture putting him out of contention for at least three weeks. While the Indian team management isn’t ruling him out of the entirety of the event given his terrific record in ICC events, they sure are keeping him under close observation even flying in Rishabh Pant as a possible replacement should Dhawan be ruled out of the world cup.

“The injury to Shikhar Dhawan is a blow, for the left-hander had just stroked a terrific hundred against Australia,” Gavaskar wrote in his column for The Times of India. “Every individual has a pain threshold and Dhawan must be truly incredible for he had injured his thumb early in the innings and yet batted as if there was no pain. That threshold is what gives hope that he will be ready to play by the time the much-awaited clash with England arrives. The left-hander s record in ICC games is fantastic and the team management would thus give him every chance to recover and get fit.”

The injury sure has put India’s Plan A in disarray as they rejig their batting order ahead of the New Zealand clash today in Nottingham. The no. 4 batting spot is in the focus again and Gavaskar sees it as an opportunity rather than a headache.

“What Dhawan s unfortunate injury does is to give India the chance to see who can bat at number four,” he wrote. “The start that the openers gave and then Dhawan s partnership with Kohli meant that Hardik Pandya was promoted to bat at four and what a terrific job he did. So if India are in a similar position then Pandya will once again be the man at four. It s only if the team loses early wickets that Vijay Shankar might get a go. Shankar batted well against the Kiwis in New Zealand earlier in the year and so is familiar with their attack. That should work in his favour.”

Writing on the New Zealand contest, Gavaskar felt India might drop spinner Kuldeep Yadav and bring in Mohammed Shami to go with the overcast conditions.

“India may also go with Mohammad Shami in place of Kuldeep Yadav in case the conditions are overcast. The way India are playing the opposition won t matter too much. It s the conditions they will be concerned about for that s the one thing that can upset the rhythm and tempo of this hungry unit,” he observed. 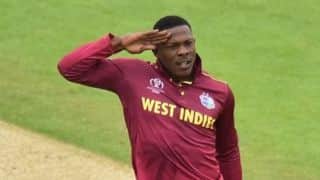