A final decision on Shikhar Dhawan's availability will be taken only after 10 to 12 days as he is too "precious" to be ruled out just yet, says Sanjay Bangar.

NOTTINGHAM: With India having suffered a major setback in their World Cup 2019 campaign with Shikhar Dhawan ruled out, assistant coach Sanjay Bangar revealed that the door is yet not closed on the India opener and a call regarding his future will only be taken after assessing him for another couple of weeks.

Dhawan on Tuesday was ruled out for at least three games after he suffered a hairline fracture on his left thumb after being struck by a Pat Cummins delivery during India’s match against Australia at the Oval. He was later taken for assessment, after which the BCCI opted to keep Dhawan in England, sensing that the left-hander might recover in time for India’s latter matches possibly against West Indies, England and Bangladesh.

On the eve of India’s third match of the World Cup, against New Zealand, Bangar revealed further details about the decision to make Dhawan stay and what his absence does to the team combination ahead of Thursday’s encounter.

“As far as Shikhar is concerned, we’ll be observing him, and around the 10th or 12th day, we’ll get to know where he stands, and we’ll be in a better position to take a call because we don’t want to rule out a precious player like Shikhar. We’re straight at the time of when the impact or the injury happened, so we would like to wait and assess after 10, 12 days,” he said.

With KL Rahul opening the innings with Rohit Sharma, Vijay Shankar emerges as a top contender for India’s No. 4 spot. During India’s light practice session on Wednesday, Shankar was the first to put on the pads and had a go in the nets for roughly 40 minutes. Dinesh Karthik is another option but the wicketkeeper batsman batted twice for approximately 10 minutes each.

“As far as the batting order goes, yes, KL moves up at the top of the order, and there are various options the team management can utilize going into the next game. Obviously, Vijay Shankar is going to be an option, and there are a couple of others as well,” said Bangar.

But while India continue to fret over Dhawan, the BCCI went ahead and sent SOS to Rishabh Pant back home, who is being flown in as cover for the injured opener and will join the team in Manchester ahead of the high-voltage India-Pakistan tie. A cover means that Pant will only be a standby and not a replacement; at least not till a final call is taken regarding Dhawan.

“So far we haven’t received any message regarding Rishabh. The thing is around 10 or 12 days, we’ll be taking a call on the status of Shikhar,” Bangar said. “Until that point, just to make sure that if and when the replacement is required and I’m saying if and when – then it is always good to have the replacement player coming in and practising with the team, as a stand by.

“He bats in the middle order, and obviously being a left-hander helps. He was named in the stand-bys as well. So the team management has gone and picked him for the order.”

But Dhawan and his status is not the only hurdle India face. This World Cup has already proven to be the most rain-effected edition in history, resulting in three washouts already two in a row, in the second week of the tournament and Nottingham threatens to add one more to the hit-list of England s inclement weather.

“Generally, when you come to England, you expect these things. You know you’re bound to get a few days where the weather is going to play, but from our point of view, it’s not only happened to us. So far, we’ve been lucky that we haven’t had a game affected by the weather. So let’s keep our fingers crossed,” Bangar said. 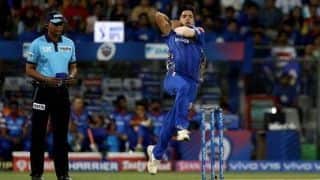