India vs New Zealand, semi-final Weather Report: Manchester Forecast for IND vs NZ: Just when we thought the weather has cleared up, it surprises us, again. It’s gotten heavy now.

Update: It’s gotten heavy, the dreadful rain. The chances for a resumption are low now

WEATHER UPDATE: That drizzle in Manchester has become heavier and the umpires have decided that the players go off with 23 balls still remaining. Since this is a semi-final, the rules say that officials can wait for two hours before overs are cut. The forecast did predict afternoon showers.

India and New Zealand have not played each other yet in the ICC Cricket World Cup 2019 after their league match was washed out without a ball being bowled at Trent Bridge, Nottingham on June 13, during a week which saw many number of matches affected by rain.

But, with India set to take on New Zealand in the first semi-final at Old Trafford Manchester, the weather forecast for Manchester seems to have become the talking point. And while there is minimal chance of rain affecting the match, but there is a constant cloud cover over Manchester throughout the day. While the morning forecast is of 80 per cent chance of precipitation, the rain forecast gets better in the day with only 20 per cent chance of rain at toss time.

However, two hours later the forecast is for 60 per cent chance of rain and later on it reduces to less than 5 per cent. While the English weather is quite unpredictable, it is a certain that with cloud cover, bowlers will have a field day today. The game going in to the reserve day is remote, but DLS method may very well come in to focus today.

Meaning, win the toss and bat first should be the ideal scenario, even if there is cloud cover. 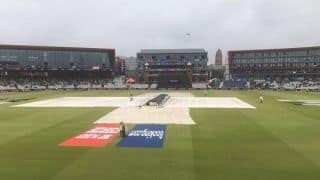 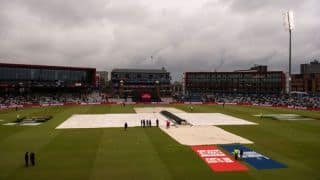