Pakistan opener Imam-ul-Haq described the World Cup match against India on Sunday as a "huge-pressure game".

Pakistan opener Imam-ul-Haq described the World Cup match against India on Sunday as a “huge-pressure game”, which has also become a must-win one for his side following the loss to Australia on Wednesday.

Despite some late defiance from captain Sarfaraz Ahmed and freewheeling number nine Wahab Riaz, Pakistan succumbed to a 41-run loss to Australia on Wednesday and are now in an increasingly precarious position in eighth place in the standings.

“Obviously, to be part of that kind of game, it’s great. It’s in Manchester, lots of Pakistani fans there – so I’m really excited about it. It’s a huge pressure game, obviously. Pakistan and India, there’s a lot of mysteries behind that but we want to just focus on our cricket strengths and how we can get better.”

Imam also felt “hugely disappointed” after getting out tamely just when he thought he was in a position to inspire his side to a famous win over defending champions Australia.

Pakistan’s opener looked in fine form and had just reached his 50 in a dangerous-looking partnership with veteran Mohammad Hafeez. At that stage his side was at 136/2, chasing what seemed a reachable target of 308. But he was dismissed for 53 off 75 balls in soft fashion by Pat Cummins.

From a ball which was short down the leg side, and would have been called a wide had he left it alone, Imam tried to pull but could only glove it to the Australian wicket-keeper Alex Carey.

It was a dismissal that transformed the match with three more wickets tumbling quickly and it left Imam so crestfallen that he hung his head and could barely drag himself back to the pavilion.

“Obviously, I’m playing well – and this team depends on me and Babar (Azam). When Babar got out (for 30), it was then my responsibility and I was going well but it was not a good ball that got me out, the same as I did against the West Indies.

“I knew I’d spent a hell of a lot of time on a tricky wicket so I knew it wouldn’t be easy for any new batsman to come in. So it was a huge disappointment because it’s a World Cup stage and if you get set, you really have to make it count if you want to stay in the tournament,” he said. 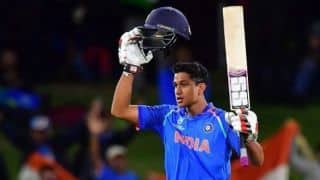