The one person however who doesn't seem to fret over India's middle order is Kohli, who hinted that India might remain unchanged.

BIRMINGHAM: Despite clamours for Rishabh Pant‘s inclusion in India‘s Playing XI, captain Virat Kohli seems to be persisting with the allrounder Vijay Shankar. Batting at No. 4 in the previous two matches, Shankar scored 29 and 14 against Afghanistan and West Indies on relatively sluggish surfaces, scores which is far from what India are looking for from their No. 4, especially not if he is someone who India are grooming to be their No. 4 for at least another year.

That is not where the problem ends though. India’s No 4, 5 and 6 haven’t quite delivered. One can argue it happened because the top order went on to bat long in the first three matches, but another reality is that even India’ top three hasn’t been the same since Shikhar Dhawan was ruled out. Now, the top three are being sent back soon, applying further pressure on the unsettled 4, 5 and 6. ALSO READ: Kohli unveils India’s away kit

With the business end of the tournament approaching quickly, India are in need of a little more stability from their talked-about middle order. Their bowling attack in the best in the world, but even they can’t be nullifying a stutter with the bat each time. The one person however who doesn’t seem to fret over it is Kohli, who backed Shankar and hinted that India might head into Sunday’s game unchanged.

“You know, it’s a strange one because he had a decent game against Pakistan. I think against Afghanistan on that pitch he looked really assured. Shot selection, again, we discussed with him for that game. Last game, again, he came out, he looked really good, and he gets a beautiful ball from Kemar Roach,” Kohli said.

“So you can’t really sit down and pinpoint things, but I personally felt he looked really solid. There’s not much that needs to be tinkered. Sometimes in cricket you just need a bit of luck to get over from 30 to 60, and then you play a defining knock for the team. He’s very close to that, and we’re very confident he’s going to end up playing that kind of knock for us

Kohli felt there was no need to press the panic button as far as India’s batting is concerned, calling it a never-ending debate. ALSO READ: Desperate England seek upswing against rampaging India to keep semi-final hopes alive

“We’ve had such a strong top order that these guys have hardly had a chance to bat. When they bat, out of four times, if once or twice it doesn’t come off, then we feel like, oh, it’s not a strong middle order, but we overlook the times that it has come good,” Kohli said.

“If you look at the first three games that we played, the contribution was absolutely fine. We were getting 300-plus, and no one said anything. We were like, oh, this is an amazing batting order. Then one game where we could not accelerate as much as we’d like to have as a team, everyone says that maybe it’s not as strong. So I think what matters for us in the change room is even a 25, 30-run contribution, if it’s getting to a score which can win you a game of cricket, that’s more than enough for us. Everyone is very, very keen to contribute, and that’s all you can ask of all your players.”

A discussion without the mention of MS Dhoni and his batting in a press conference is like pizza without cheese. Dhoni, under whom Kohli made his international debut, received flak for his slow batting against Afghanistan but revived himself to produce a half-century. His unbeaten 56 off 62 wasn’t the quickest either but it offered India room to breathe as from 180/5, they reached 268/7 against West Indies.

“I don’t think that he’s ever been a cricketer that’s ever had the need to be told what exactly he needs to do,” Kohli said about Dhoni.

“We have total belief in him, and he stood up for the team many times, especially if you look at this calendar year and the kind of performances he’s given. I don’t think it’s fair to point out one or two performances which anyone can falter with the bat. After the last game, he went into the nets. He put in a performance and got us to a winning total, and we won the game. We’re very, very happy and comfortable with where we stand as a team and how the batting is going at the moment.” 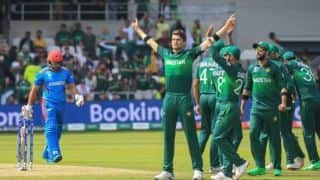 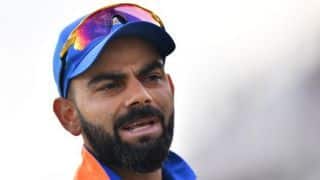