The two on-field umpires had four decision overturned, in addition to Gaffney missing a glaring front foot no ball from Starc.

NOTTINGHAM: Carlos Brathwaite and Jason Holder minced no words as they expressed their displeasure at the sub-par umpiring that was on display during the Australia-West Indies encounter at Trent Bridge. The two on-field umpires Chris Gaffney and Ruchira Palliyaguruge had four decision overturned, in addition to Gaffney missing a glaring front-foot no ball from Mitchell Starc. It was a blatant error committed as Starc dismissed Chris Gayle off the next ball whereas it should have been a free hit.

On air, Michael Holding called the umpiring atrocious, while Brathwaite dubbed it frustrating and dodgy. But as much as he was unimpressed with the umpiring, the West Indies allrounder maintained it did not cost them the match which saw them go down to Australia by 15 runs.

“I don’t know if I’ll be fined for saying it but I just think that the umpiring was a bit frustrating,” said Brathwaite. “Even when we were bowling we thought a few balls close to head height were called wides. And obviously three decisions in one over as far as I can remember being dodgy, it was frustrating and sent ripples through the dressing room.

“To lose Chris in a chase of 280, who can probably get 180 of them himself obviously, broke the start that we wanted to have. But the umpires do their job, they try to do it to the best of their ability, we as players go out there to do our job as well, so there was no confrontation between the players and the umpires.”

Brathwaite went on to claim that such errors are a little too common especially when the West Indies play.

“I just think I’d like that for West Indies, we don’t have to use all our reviews and that some of the other teams get a chance to use theirs because every time we get hit on our pad the finger goes up. When we hit the opposition on their pad, the finger stays down,” said the allrounder.

Holder, while addressing the media pointed out that he ended up laughing when he saw Starc overstep. Gayle had initially received a couple of reprieves, both time reviewing the umpire s decision and ending up reversing it. The first instance was a caught behind appeal, which as per the replays, showed the ball flicking the stumps but not taking the bails down. The second was an LBW appeal which pitched outside leg.

“I saw it on the screen in the dressing room, and I just laughed, man. I couldn’t believe it. But again, I guess things didn’t go our way today,” Holder said.

The West Indies skipper himself overturned two decisions, both lbws. He was given out to Adam Zampa but as per the replay, the ball pitched outside leg stump. The next one was off a sweep shot which Holder failed to connect. This time, the ball seemed to be missing leg. Holder survived both times but showed his displeasure while he was batting.

“I think I’ll just say I just found ourselves a bit unlucky to be on the other end of all the decisions. I guess honest mistakes from the umpires, I don’t want to get into the officiating part, but it’s just ironic. I don’t even know what to say about it, but it is a funny situation where all of them went against us, and then we had to review them, but I guess that’s part of the game again,” he added.

Holder made it clear that the loss against Australia was a missed opportunity but the team has taken it as a learning experience ahead of its remaining matches. West Indies let the match slip twice, first allowing Australia to post 288 from a position of 38 for 4, and later squandering a wonderful chance to close out the game when 38 were required off 30 balls with four wickets remaining.

“I think one of the things we can take from the Australians’ performance was that Steve batted quite deep and that’s something we need from our top order. I think Shai Hope has been outstanding in that regard, but it didn’t go his way today. I think credit must be given to Australia. I thought they came back and bowled really well with the old ball and credit problems for us. We had to decide what we wanted to do in terms of playing it, or taking it on or just knocking it around. But credit must be given.

“Yeah, we definitely missed an opportunity. I just think that’s sport. We’ve just got to learn from it. Yeah, it’s a bit disappointing to be losing a game like that when we’re in full control of the game, but these things happen.” 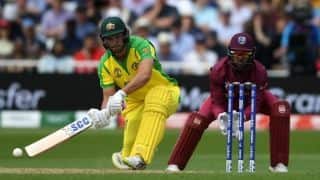 Cricket World Cup 2019: We always thought Nathan Coulter-Nile had the ability, he was exceptional: Aaron Finch