Australia coach Justin Langer says England are still the team to beat at the World Cup despite their surprise loss to Sri Lanka.

Australia coach Justin Langer has lavished high praises on Jos Buttler while saying that England are still the team to beat at the World Cup despite their surprise loss to Sri Lanka. England’s seemingly assured path to the semi-finals now looks a lot less smooth after a 20-run reverse at Headingley followed an earlier group-stage defeat by Pakistan.

They next face arch-rivals Australia at Lord’s on Tuesday, with the reigning champions in fine form after winning five of their six pool games so far — the only blot on their record a defeat by title rivals India. But Langer said England fully deserved their place at the top of the one-day international rankings, having climbed to the summit from the ruins of a woeful first-round exit at the 2015 World Cup.

“They are the best team in the world. Just look at their team… nothing has changed in a week,” Langer said on Sunday. “I can’t wait for Tuesday — England at Lord’s, World Cup. That is what we are thinking about,” added the former Australia opening batsman.

Langer had a stint in the English domestic game with southwest side Somerset, where he first encountered a young Buttler. The England vice-captain is now regarded as one of the quickest-scoring and most innovative batsmen in the game today, with Langer nominating the wicketkeeper-batsman as the natural successor to veteran India great MS Dhoni.

“Jos is an unbelievable player. I love watching him bat. He is the new Dhoni of world cricket,” said Langer. “I hope he gets a duck in this (Tuesday’s) game obviously, but I saw him at Somerset and he is an unbelievable athlete and an incredible finisher. They (England) have a very strong batting unit and we will have to be right on it.”

But Australia have several in-form batsmen of their own, notably opener David Warner, who is the tournament’s current leading run-scorer with 447 from six innings. Both Warner and former captain Steve Smith are making their comebacks from year-long ball-tampering bans, with the pair roundly booed when they faced England in a World Cup warm-up match in Southampton.

Langer, asked if he expected more of the same even from the traditionally polite spectators at Lord’s, replied: “Yes, probably but that is OK. “There is nothing we can do about the crowds or the opposition. We will just go about our business. I did not know Davey that well (before being appointed as Australia coach) but he is good company.

“His runs speak for themselves. He is smiling a lot. He is hungry. He is playing well. He loves his family. Like Steve, the return has been seamless and they are playing well too, which is pleasing,” Langer added. 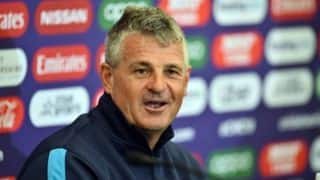