India's fielding coach exudes confidence and contentment at the resources he has at his disposal.

NOTTINGHAM: India may have been the latest victim of England’s erratic rain after their tie against New Zealand was washed out, but it’s time to move on from the dampener at Trent Bridge. They next face Pakistan, one of the ICC World Cup‘s marquee clash, whose tickets applications received by the ICC outnumbered that of the final at Lord’s.

Pakistan are hurting after losing to Australia, and need to win against India to stay alive. They are not known to be a great fielding side. Their opponents in Sunday, India weren’t either, but the current crop of players have lifted the standards to an extent that it’s emerged as one of the top fielding sides in the world.

Ravindra Jadeja is electric in the field; perhaps the best fielder in the world at the moment, and India’s captain Virat Kohli isn’t too far behind. He may be far from a complete product in the slips but the India captain is a terrific fielder. Unbelievable? Listen to R Sridhar, India’s fielding coach, exuding confidence and contentment at the resources he has at his disposal.

“I’m very happy with the kind of resources I have. We have a terrific slip catcher and a safe catcher in Rohit, and we have two guys, Virat and Jaddu, who are very intimidating to the position. They can intimidate any batsman, and they are prowling in the 30-yard range. To complement that, we have a player in Hardik Pandya, who can really help when needed. We are safe catchers. We’re not fast bowlers.” Sridhar said. (WATCH: On 14th July I want to have World Cup in my hand – Hardik Pandya)

“These are all the usual suspects, but we saw Chahal and Bumrah crack it up in the last game, diving after bowling long spells. We were in the penalty minute ball of the inning, diving and stopping runs. So that all goes well.

“The biggest thing that came out to me was the attitude of the fielders, where they put the team ahead of themselves, but these are the qualities which you need when you want to go out and win championships. This really came out in the last game, and that was good to see. So I think the biggest challenge is to stay consistent. To me, that is the biggest challenge, to reduce the time between the good days and bad days. That is integral.”

While Sridhar reckoned India’s outfield was superb, he feels there’s some work to be done as far as direct hits are concerned, compared to a team like Australia.

“It is something which I have my eye on as well, and we practice a lot for that. I would say converting, whether it’s a run-out or non, converting one in three or four throws is a good conversion rate, in my opinion,” he said. “Picking up one out of four, you’re doing a good job as a direct unit, but we failed to do that in the last game. We had over ten strikes, and we hit only once. In some days we hit three out of five. It’s a practice thing and a system best thing, but that is one area we work hard on in every session.” (ALSO READ: India, New Zealand look to move beyond Trent Bridge dampener)

Despite being a force in the field, Indian players are guilty of going for throws, even when the batsman in inside his crease. The decision of players to go for a glory run-out has received mixed reactions but Sridhar is a follower, insisting that it’s something he encourages India’s players to do.

“If there is an opportunity, we encourage the respective fielder to go for the stumps because we believe that his teammate will have his back, by backing up the throw. Sometimes it happens, and very rarely it doesn’t happen. So we encourage fielders to create an opportunity where none exists. We encourage fielders to try and convert an opportunity which they have created. So that is a rule we would like to take as a fielding unit, to be more on the aggressive side, and we all know where it comes from. It comes from the captain himself,” Sridhar said.

Under Sridhar, the likes of Jasprit Bumrah and Yuzvendra Chahal, who aren’t athletically, natural fielders, have also blossomed in the field.

“One area is we try to educate them with awareness with respect to fielding, and we try to work on fitness. We’ve got a lead-up to this tournament to work with Chahal, Bumrah, Kedar, guys like this, who are willing to work really hard and to work on their skills. So that really helped,” reckoned Sridhar. (ALSO READ: Shikhar Dhawan will be in a plaster for a couple of weeks: Virat Kohli)

“The mindset of the players combined with the increased levels of fitness, and then we can chip in with the technical aspect of fielding and the awareness and anticipation part. So combining all this definitely helps them improve their fielding skills.” 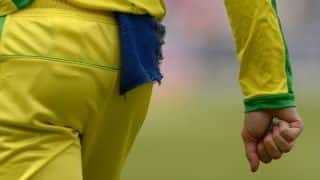 Adam Zampa not only one who uses hand-warmers, Indian fielders also do