Kuldeep Yadav and Yuzvendra Chahal should be destructive towards the business end of the World Cup, reckons Michael Hussey.

Wrist spinners Kuldeep Yadav and Yuzvendra Chahal should be destructive towards the business end of the World Cup because pitches will be dry and it will put India in an advantageous position, reckons former Australia batsman Michael Hussey.

Chahal has taken eight wickets in four matches while chinaman Yadav, who came into tournament struggling for form, has managed to dismiss just three batsmen so far.

However, Hussey said, it will change as the tournament progresses. “Looking at the Indian team, they are wonderfully balanced team. They have got all bases covered well and towards the back end of the tournament as the pitches (are) going to be dry and more used, the spinners would get to play more role,” Hussey said.

“And that is where India have got a big advantage over lot of other teams. They have got two quality wrist spinners (Kuldeep and Chahal), who can be match-winners. India are brilliantly placed at the moment, they have got lot of fire power in different departments and I expect them to certainly get to the semi-finals and possibly the final,” Hussey added.

Mahendra Singh Dhoni’s slow knock against Afghanistan drew flak from various quarters but Hussey, who has worked closely with him at Chennai Super Kings, did not read too much into it. “I think he (Dhoni) is crucially important to this Indian team. It’s difficult, coming in and trying to bat against these mystery spinners, rotate the strike, it is challenging. You are not sure which way the ball is turning.

“On a slow pitch, it makes pretty tough (for) batting. The other batsman (Kedar Jadhav) was also struggling to rotate strike (in the Afghanistan) game. So I wouldn’t be stressing too much on it.

“Dhoni plays the fast bowlers early in the innings, he can rotate them a little-bit easier. I think Afghanistan was one of trickier games for someone like MS,” he added.

“I have been little bit worried about the fourth and fifth bowling options for Australia, but they are starting to get better, with someone like (Jason) Behrendorff coming in, and who has done a good job in the last match. I thought Nathon Lyon also did a good job.

“Australia have a proud record in history of World Cup and they want to keep that going, they know how to win those big games,” said Hussey, who played 79 Tests and 185 ODIs.

Asked if Australia were too dependent on their opening pair, Hussey many teams including India depend on a couple of key players. “You look at New Zealand, it is dependent on (Kane) Williamson, India are very dependent on Rohit (Sharma) and Virat Kohli, so every team has its key players and it is about other guys pulling good performances when needed and Australian team can do that.

“They haven’t had to play big roles just yet because the likes of Warner, Finch and probably Smith to a lesser degree have done a good job so far,” he said. 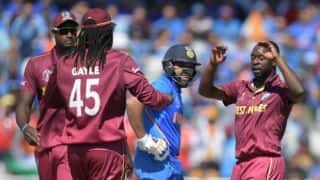