TAUNTON: New Zealand overcame a period of play where the Afghanistan openers swung, hoicked and gave it the old fashioned whip, before Jimmy Neesham decided to come to the party, later joined by Lockie Ferguson. Neesham, the New Zealand allrounder took out five Afghan batsmen, ending their pre-mature fun. Neesham took care of the top and middle order, while Ferguson wiped out the tail to roll over Afghanistan for 172 with nine overs remaining.

From 51 for 1, Afghanistan lost steam, with their next nine wickets contributing for a little over 120 runs. Once the opening wicket fell, Neesham and New Zealand found their mark. It was good, aggressive fast bowling, and one that knocked the stuffing out of Afghanistan, who despite Hashmatullah Shahidi’s stubborn fifty, could not make the most of a bright start.

Zazai twice skied the ball towards long leg and long on but survived on both occasions, with men converging. Zazai’s chancy knock ended shortly after the fifty was raised and he perished slicing Jimmy Neesham to Colin Munro at sweeper cover. Two balls later, Noor Ali Zadran tickled a Matt Henry ball down leg to Tom Latham.

With New Zealand pacers again inflicting early damage, Hashmatullah Shahidi and Mohammad Nabi dug in for 35 off 9.2 overs, even if that meant spending some time at the wicket. After taking 20 balls to open his account, Shahidi struck consecutive boundaries after a brief rain intervention. Just two overs could be bowled before the heavens opened up again. When play resumed after a second pause, Neesham came back and snuck out Nabi and Najibullah Zadran at 109 for 6. That was his fifth wicket, and with it, Neesham joined Richard Hadlee, Shane Bond, Tim Southee and Trent Boult among New Zealand bowlers to take five-wicket hauls in a World Cup.

By the time Neesham bowled out, Afghanistan simply could not rotate strike. Islam Alikhil, the replacement of Mohammad Shahzad, scored 2 off 21, but managed to hang around for 21 runs with Shahidi. It was Colin de Grandhomme, who ended Alikhil’s misery, before Henry knocked over Rashid Khan, who got himself in a tangle. The ball hit his helmet grill and rebounded onto the stumps. 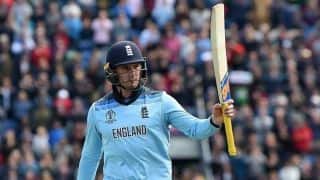