Rohit's brilliance was followed by a clinical innings from Virat Kohli as India posted their highest total against Pakistan in a World Cup.

MANCHESTER: Third time in three innings, Rohit Sharma went past 50, and for the second time converted it into a century to lead India‘s attack on Pakistan which saw them post 336/5 at the Old Trafford on Sunday.

Rohit’s brilliance was followed by a clinical innings from Virat Kohli, which seemingly put India on track for their second-straight 350-plus total in the World Cup. But a strong comeback from Pakistan post a rain interval towards the fag end of the innings kept India short of it. Still, this is India’s highest total against Pakistan across seven World Cup meetings.

Against the recent norm of India biding time in the Powerplay, India got off to a racing start with Rohit leading the way with his quickest ODI half-century. With KL Rahul, Rohit put on 136, the highest opening stand for India against Pakistan in the World Cup. Overcoming a streaky start, runs began to flow smoothly off Rohit’s bat. In company of a new opening partner in Rahul, Rohit saw off the initial overs in which Mohammad Amir bowled a lovely line, on a good length, forcing both batsmen to come on the front foot.

After a quiet first over, Rohit took Hasan Ali on his first three overs costing 26 runs. Besides, what further broke Pakistan’s initial momentum was Amir being warned twice for running onto the pitch. Not risking the possibility of him landing on the protected area a third time, the left-armer was taken off. With Pakistan operating Imad Wasim and Shadab Khan, things got easier for Rohit and Rahul. Wasim tested Rahul and Rohit occasionally getting the ball to drift, but both motored along nicely.

After an inside edge went hustling past Rohit’s stumps for a boundary, the opener caressed Ali down the ground, cut him brutally towards backward point and thumped him over cow corner. He then shifted gear against both spinners with Rohit and Rahul combining to take Shadab for 17 in his first over. Put under the pump early, Pakistan missed a couple of run-out chances to add to their woes.

A massive mix up between Rohit and Rahul saw Rohit scamper for a second run only to be refused by Rahul. He was three-fourths the way down the pitch but the throw comes to the wrong end. Two overs later, this time it was Rahul hurrying to complete a quick single, but another wayward throw zipped past skipper Sarfraz Ahmed. The 50 partnership was up in 60 balls, despite India playing out 33 dot balls inside the first 10 overs.

While Rohit kept India ticking, Rahul was equally impressive. Having made his ODI debut in July 2016 and playing only his 17th ODI, Rahul pulled Amir for his first boundary after playing out a maiden to him first over. A paddle sweep and a backfoot cut off Shadab and Imad followed. The two 38-year-olds, Shoaib Malik and Mohammad Hafeez, were deposited into the stands as Rahul reached his fifty off 69 balls.

Like his left-arm partner Amir, Wahab Riaz received two early warning for landing into the zone during his follow-through, but landed the blow Pakistan so desperately sought. Rahul drove to Babar Azam at cover, a loose shot almost identical to his dismissal against South Africa. But the little momentum Pakistan would have hoped to gain was dismissed by Rohit and Kohli, who put together 98 for the second wicket.

With a punch towards sweeper cover, Rohit raised his 24th hundred off 85 balls his second-quickest in ODIs. Once the 100 was achieved, Rohit made the most of it and went for the full throttle, hitting three boundaries in a space of 10 balls off Wahab. He welcomed Ali back with another pull shot for a four, but played an ambitious scoop which went straight to Wahab at short fine leg.

Kohli, meanwhile, almost unnoticed, moved to 24 off 31, with just one boundary, but accelerated once Rohit departed. Wahab bowled to him and a 144kmph but Kohli responded with a lofted off-drive which sped at almost 200kmph. As always, Kohli ran like a man possessed bringing up his half-century before biffing Amir down the ground. He continued to topple records, becoming the quickest to reach 11000 runs in 222 innings with successive boundaries off Ali. It was a typical Kohli inning; everything seeming in control, everything coming off the middle.

With India storming towards a potential huge total, the management sent Hardik Pandya at No. 4 ahead of Vijay Shankar. His first boundary was a one-handed slash to third man for a six. Next was a whip off a full toss. Third, a brutal drive towards deep extra cover which brought up the 50-run partnership between Pandya and Kohli off just 32 balls. Aiming a fourth, Pandya’s attempted helicopter found Babar at long-on.

The audience’s euphoria of MS Dhoni walking out was short-lived as he nicked Amir to give him a second wicket. With India thundering towards a 350-plus total, the dreaded rain caused an interruption. Thankfully, there was no loss in overs. After resumption, Kohli delicately cut Wahab for a four before offering a feather to Sarfraz off Amir. 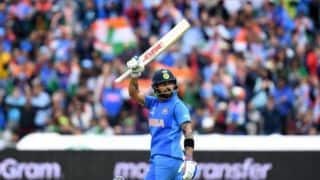 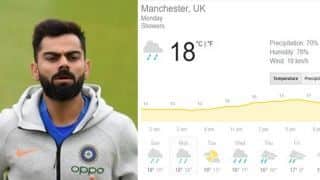