Du Plessis was pleased to see South Africa finally opening their account on the points-table.

SOUTHAMPTON: South Africa were 29 for 2 when rain lashed the Ageas Bowl in Southampton and continued for almost five hours and more resulting in the game eventually getting washed out. It wasn t the best of starts by South Africa, who have lost their first three games of the 2019 World Cup, but skipper Faf du Plessis was pleased that the team had finally opened its account on the points-table.

“The horse is out of the shed, if that’s the right wording,” said du Plessis. “You know we wanted to play a full game today. I think it’s pretty obvious that when you play a team like West Indies, just because of the make-up of their side. So it’s disappointing because it’s important for us to get some cricket in and start ticking over. But we can’t control the weather. So as a team, we’ll take the one point and move forward to the next week.”

With two wickets falling inside 10 overs, no one could estimate as to what would have happened had there been a resumption. For the West Indies, it was once again Sheldon Cottrell doing early damage, getting rid of opener Hashim Amla, gloving to Chris Gayle and slip, and later Aiden Markram, the replacement of JP Duminy, who offered a feather down leg to Shai Hope. For Amla in particular, it was another failure, the list of which continues to grow.

“Hash is a class player,” said du Plessis. “You know it’s tough on a wicket like that because, when you are opening up the innings, you need a bit of luck to go your way. Like most of our batters, it’s just a matter of getting in, and getting those starts converted into runs, because if you can get through the first 10-15 overs, that’s when the scores come.

“We have seen over the last game and today that the first ten overs can be a little bit tricky, there is more pace and bounce in the wicket and the nature of it. You do lose wickets.

“So, yeah, he will be disappointed he got out today, but he has been hitting the ball really well in the nets so we just are hoping it’s around the corner for him. He played a really good innings leading up to the two games, leading up to the World Cup, against the West Indies when they were bowling quick pace.”

As for the bowling unit, which is already hampered by the loss of Dale Steyn due to injury, du Plessis, provided some good news about the recovering Lungi Ngidi.

“We wanted him to be ready for today purely from the fact it feels every game is a must-win game for us at the moment. With Lungi, the amount of bowling that he’s been doing this tournament, he hasn’t bowled a lot and then he picks up an injury and it is probably on the verge of can he and can’t he play? So the pure fact that he hasn’t really bowled a lot of overs. We just feel like it is more important for him to just have another three or four days to build-up his loads again so he can bowl eight, nine, ten overs,” he said.

“And luckily for us today there wasn’t a lot of cricket so we can throw him straight into the game the next game.”

But while du Plessis was a relieved man to finally get a point, the West Indies would have been left disappointed with how the game eventually panned out. Once again, their pace bowling had left an early impact, and with South Africa s batsmen struggling in the tournament, one can only assume if West Indies were at the wrong end of the stick.

For a brief period, the skies cleared there lurked the possibility of a T20 match somewhere, which, as per West head coach Floyd Reifer, would have been an ideal scenario for his players to land a knockout blow to South Africa.

“It was a good opportunity to play against them, like any other team in the competition,” Reifer said. “We are playing fearless cricket, so it doesn’t matter who we play. When we play them, we want to play the same brand of cricket that we are playing, what we executed in the past couple of games. ”

Even Du Plessis felt that had the match been reduced in terms of overs, it could have favoured the West Indies more.

“Generally when you are chasing, it always favours the team batting second,” he said. “We batted seven overs, they are not expecting a shortened game, so the pace that you go at, and losing two wickets, [changes things].

“Even with, around in my mind, when I was looking at 30, 35 overs, I was still feeling like if we get a score of 200, or 200-plus, I do feel there was enough in that wicket with our bowling attack, especially when playing Beuran today as well, an extra seamer.”

“But the further the game goes, the closer to a T20 game it becomes, the odds are heavily in their favour. So as it got a bit later in the day, then you’d rather get the point and go.” 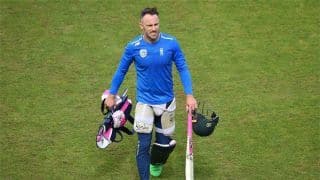 De Villiers row could work in the best interest of the team: Faf du Plessis 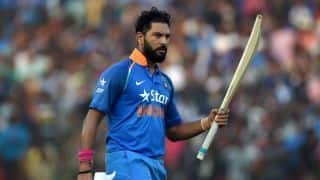