Sri Lanka captain Dimuth Karunaratne feels the middle-order has to take more responsibility in the remaining games of the World Cup after suffering heavy collapses in their opening two matches.

Sri Lanka suffered a thumping 10-wicket loss to New Zealand in their opening match of World Cup before they managed to prevail over Afghanistan by 34 runs in their second outing.

However, the Sri Lankan middle-order failed to fire in both the games. “If we make a good start to the innings then we can keep that momentum going. If you take the last couple of games, we couldn’t capitalise on the starts we made.

Sri Lanka were bowled out for just 136 against the Black Caps despite Karunaratne’s unbeaten 52, and then they crumbled from 144/1 to 201 all out against Afghanistan on the same pitch.

“We need those middle order contributions and I think that’s the key for us as a batting line-up. Other than that, I think as a group we’re doing really good,” Karunaratne was quoted as saying by ICC media.

“We all came here to play cricket so it’s not good that we didn’t get to play. We’re really disappointed as a team but we’ll look ahead to the next game.

“We won our last game against Afghanistan and while we may lose some matches along the way during the World Cup, we always give a lot of fight and that’s all we want,” said the skipper.

Sri Lanka, the 1996 champions, are now looking ahead to their clash against Bangladesh here on June 11.

“We want to compete with the other teams. We did really well against Afghanistan to get the win and I want us to take that confidence into the rest of the matches, starting with Bangladesh,” said Karunaratne. 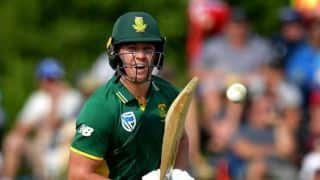