Kuldeep Yadav says India have showed they can defend relatively smaller totals with victories over West Indies and Afghanistan.

Wrist spinner Kuldeep Yadav says India have showed they can defend relatively smaller totals with victories over West Indies and Afghanistan in the ongoing World Cup.

The Indian attack defended 224 against Afghanistan and 268 against West Indies on Thursday, with almost all the bowlers playing a part in these wins.

The all-round efforts shows that India’s bowling attack is not just about the world’s number one bowler Jasprit Bumrah.

“Jasprit has been bowling really well and has been for a couple of years since his international debut,” said Kuldeep, who took 1/35 including the crucial wicket of Nicholas Pooran for 28 against the West Indies.

“Then you have (Mohammed) Shami, who was only playing his second game and bowled really well. We’ve got a good fast bowling attack, as well as spinners.

“We’re just looking for the team combination. We’re doing really well as a bowling attack and that is important. In the last game (against Afghanistan) we defended 225 and showed we can defend a total like this.”

Although the match finally turned out to be one-sided, the West Indies seemed in the hunt at the halfway stage.

Kemar Roach’s three wickets had helped them put India under pressure, but Mahendra Singh Dhoni (56 not out) and Hardik Pandya (46) made crucial contributions.

“We played really well. At one moment we were looking at 250 and then Dhoni and Hardik gave us a good total,” Kuldeep said.

“270 was really good on this track. Later the ball was spinning a bit and that gave us the momentum. Shami picking up two early wickets was huge for us, then Hardik got one and I got one so it was a really satisfying performance.” 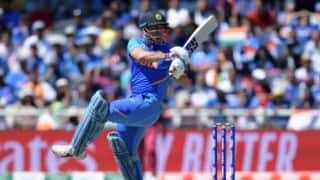