It's been almost three years since Yuzvendra Chahal first played an international game but for him, MS Dhoni continues to be the guiding force.

It’s been almost three years since Yuzvendra Chahal first played an international game but for India’s first-choice spinner in limited-overs cricket, MS Dhoni continues to be the guiding force.

Having formed a potent partnership with fellow spinner Kuldeep Yadav, Chahal is all geared up to represent India at the ICC World Cup 2019 – his first major international tournament. The duo will be vital to India’s success at the showpiece event.

“Whatever happens, you need Mahi (Dhoni) bhai,” Chahal told The Times of India. “We still obey what he says. He intervenes when we go wrong. It was the same when we first arrived. Even today, if we plan something of our own, we feel the need to talk to him about it.”

Not just on-field, Chahal and Kuldeep seem to share a strong bond of the field as well. In their times of struggle too, they help each other out.

“We do talk to each other over phone. He’s like my younger brother. You need a few people to talk to you when you are down. When I have a rough phase, he talks to me. When we are not with the team, we like to be in our personal space but it’s important to keep in touch too,” Chahal reveals.

Chahal, who has 72 wickets from 41 ODIs, also spoke about how they help each other out on the field. “It feels nice to know that our partnership works. We know each other for seven-eight years. We were together at the Mumbai Indians. We trust each other. If I have a bad over, I know he will try to cover it up from the other end by being a bit defensive so that I can make a good comeback in my next over.

The World Cup is expected to be dominated by batsmen but Chahal isn’t worried about that prospect keeping faith in his abilities.

Shedding light on how he plans his strategy depending on the ground, the 28-year-old said talking to captain Virat Kohli and Dhoni forms a crucial part.

“It depends on the situation. Then we look at the size of the ground. If it’s a small ground and the pitch is flat, you won’t see us flighting the ball as frequently. And then you watch how eager the batsman is and quickly analyse his strengths. But when you first arrive at the venue, you analyse the dimensions and conditions and then you go back to your room and draw a plan,” he said.

He continued, “The important bit is to talk to the senior batsmen like Mahi bhai, Virat, Rohit and Shikhar. You ask them how they would approach their batting in such conditions. And they have played at most venues around the world. They have a better idea.” 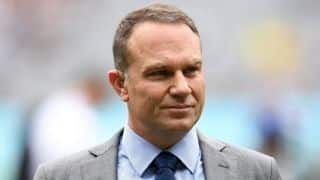