Hong Kong, Nepal, Ireland all had great tournaments in World T20 while Netherlands stood out.

The International Cricket Council‘s (ICC) faith in associate member teams was vindicated by their recent showing in the ICC World T20 2014, development manager Tim Anderson has said, singling out the Netherlands’ upset win over England.

The Netherlands humiliated England by 45 runs in the Super-10 stage, while unfancied Hong Kong fulfilled their dream of getting a big scalp with a two-wicket victory over Test team Bangladesh in the first round.

Anderson said the Netherlands’ victory over England, their second in two meetings after also beating them in the ICC World T20 2009, was a good sign for next year’s ICC World Cup 2015 which will feature four associate teams.

“The Netherlands performed very well and their win over England in the Super-10 stage showed the smaller teams have the talent to upset bigger nations,” he said on a flight back from the tournament.

“The associates were provided with an opportunity at the World T20 and we are pleased with their showing, and will make sure they do well in next year’s World Cup,” he added.

Ireland, Afghanistan, Scotland and the United Arab Emirates will join the ten full members in next year’s World Cup in Australia and New Zealand.

Each team has been allocated $1 million in funding and will train in the host countries ahead of the tournament.

Afghanistan’s qualification was seen as particularly noteworthy, with the war-torn country rising rapidly through the ranks after becoming the ICC’s 37th associate member last year.

Anderson said Papua New Guinea could be the next major success story.

“PNG is a great story and they have now earned one-day status, and we are sure they will further progress with around 10,000 local players and a good base for the game. Some of their players are now contracted with the Big Bash in Australia,” he said. 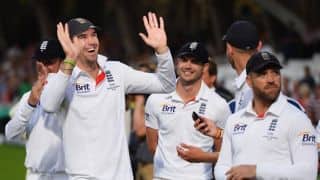 Kevin Pietersen insists on having good relationship with England players